“What Does Ghislaine Have On Trump?’ 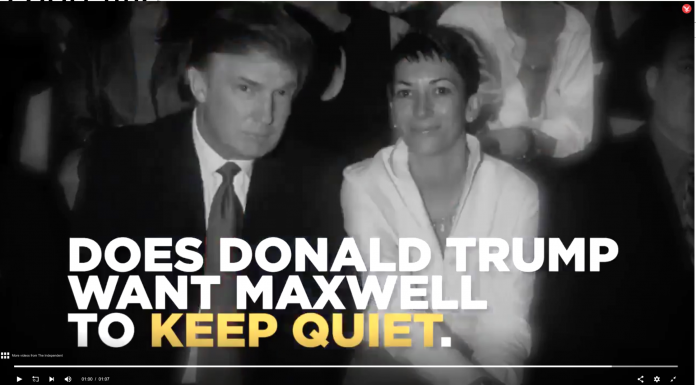 “Why does he demean other women but treat the head of an alleged sex slave ring with respect?”

The Independent (UK) – A prominent group of Republicans opposing Donald Trump have released a new advertisement attacking the US president for his support of Ghislaine Maxwell.

The Lincoln Project, which was founded by high-profile conservatives such as George Conway, posted the ad to Twitter on Friday with the caption: “What does Ghislaine Maxwell have on @realDonaldTrump?”

It shows Mr Trump berating a number of female journalists – with the ad saying at one point, “This is how Donald Trump speaks to accomplished women” – before flashing to a recent White House press briefing in which the president spoke about his relationship with Ms Maxwell over the years.

“I just wish her well, frankly,” Mr Trump is heard saying in the briefing.

A woman narrating the advertisement then says: “Just what does Maxwell have on Donald Trump? Why does he demean other women but treat the head of an alleged sex slave ring with respect? Does Donald Trump want Maxwell to keep quiet? America needs to know … ” Read more.

“The Lincoln Project Is Red on the Inside”

The actions of these anti-Trump “Republicans” aren’t Republican at all.

Patriot Post – To hear it from those behind The Lincoln Project, they’re merely placing country over party by opposing the excesses of Donald Trump.

Thus, they support Joe Biden only for the purpose of removing Trump. But rest assured, they tell us: They’re still conservatives and Republicans.

Well, here are some data points that we can use to evaluate their claims:

The project’s leader, John Weaver, has declared that the group will go after Republicans who oppose Biden’s far-left agenda.

The Lincoln Project is also targeting moderate Republican senators in swing seats with the express goal of flipping the Senate.

The content of the group’s attacks on those senators repeats progressive canards, including the discredited “kids in cages” lie.

Just a quick look makes one want to blurt out an eight-letter word that starts with “bull.”

But a closer look causes us to rethink whether the Lincoln Project’s top figures were ever really that conservative — or interested in advancing conservative policies and principles — in the first place.

For starters, let’s break down the threat to go after Republicans who oppose Biden’s far-left agenda.

This means, essentially, that to stay in the good graces of The Lincoln Project, a Republican must tolerate abortion on demand, sweeping gun control, packing the Supreme Court, ending the Senate filibuster, hiking taxes, and the hard Left’s scheme to destroy the suburbs.

What, then, are the “policy differences” they claim to have with Biden? They don’t say.

Next, these same “Republicans” want to flip the Senate to the Democrats. If they’re successful, Senate Majority Leader Chuck Schumer could nuke the filibuster and then follow it with legislation to pack the Supreme Court, for example … Read more.