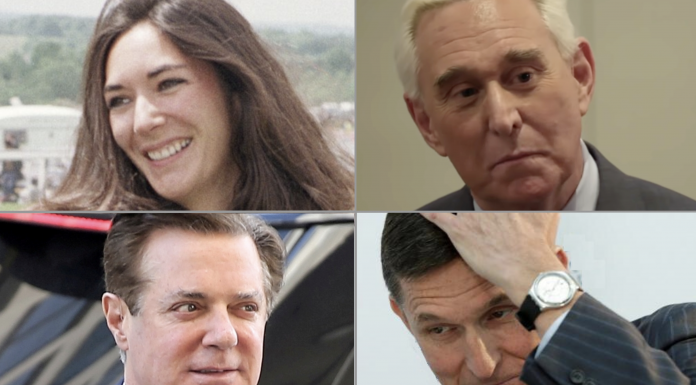 L.A. Times – At President Trump’s news conference Tuesday, which was supposed to be about COVID-19, he was asked an easy question.

Not about the pandemic. Not about reopening schools. About Ghislaine Maxwell, alleged accomplice of Jeffrey Epstein, who died in prison by suicide one year ago, or so official reports say, before he could be tried on sex trafficking charges.

Maxwell was arrested this month and now sits in jail in Brooklyn, accused of helping Epstein recruit, groom and sexually abuse underage girls.

A reporter asked Trump whether Maxwell might implicate any of the famous men in Epstein’s circle. Prince Andrew, say. Or Bill Clinton.

All Trump had to do was go boilerplate: “These allegations against Maxwell are very serious,” he could have said, “and I hope justice is done.”

If that was too difficult, why not take a shot at Clinton, who traveled with Epstein and hosted Maxwell at his daughter Chelsea’s wedding.

Does Trump’s use of the line “I wish her well” suggest that he has an interest in silencing Ghislaine Maxwell? Comment below.

But the president couldn’t muster anything that suggested he disapproves of sexually abusing children. Instead, he sent his regards to Maxwell. Best wishes to Ghislaine, who has pleaded not guilty, as she stews in jail.

Trump, as he helpfully reminded the briefing room, was Epstein’s and Maxwell’s neighbor in Palm Beach. After Epstein was first convicted, of soliciting a child for prostitution, the president claimed that their friendship had been over for years.

But Trump once called Epstein a “terrific guy,” and as for Maxwell, “I just wish her well, frankly,” Trump said Tuesday.

“I wish her well,” he repeated.

Trump’s mob-style verbal thuggery with witnesses and rivals is well known. Remember what he said about Marie Yovanovitch, the former U.S. ambassador to Ukraine? “She’s going to go through some things.”

But he uses carrots, too. Blowing Maxwell figurative kisses, the Twitterverse suggested, could be a way to signal that he has her back.

As early as the 1980s, Trump and Epstein “swam in the same social pool,” as the Washington Post put it. Epstein long bragged that he introduced Trump to his current wife, Melania.

In 1992, the Epstein and Trump were the sole male guests at a Mar-a-Lago party with 28 young women who had been flown in “for entertainment.”

Video from another 1992 Mar-a-Lago party surfaced last year showing the two men appraising NFL cheerleaders and Trump pawing at one. Epstein, Trump told New York magazine in 2002, “likes beautiful women as much as I do, and many of them are on the younger side.”

Does Trump’s use of the line “I wish her well” suggest that he has an interest in silencing Ghislaine Maxwell? Comment below.

ALSO ON HEADLINE HEALTH TODAY: 2 Words People Use To Get Out Of Mask Rule | Preacher Promptly Fired After ‘Coming Out As Trans’ | FL Man, 90, Dons Full Body PPE For Final Good-Byes