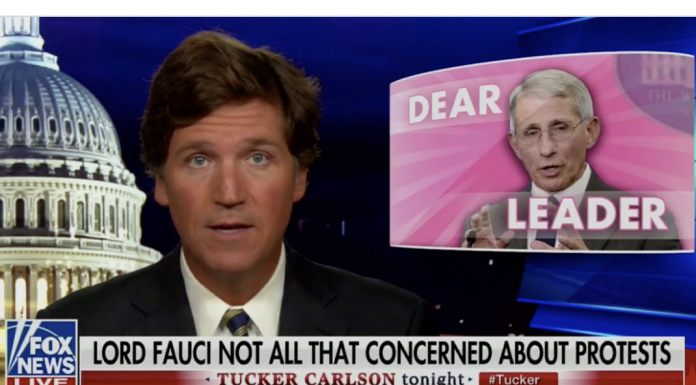 NEWSWEEK – Tucker Carlson has once again criticized Dr. Anthony Fauci, this time over his answer before Congress to a question about the wisdom of protesters gathering in large numbers.

This set the tone for his monologue which hinted at a comparison between the advice by the director of the National Institute of Allergy and Infectious Diseases (NIAID) with the pronouncements by the dictator in Pyongyang.

Carlson threw to a clip of Republican Congressman Jim Jordan [Ohio] asking Fauci at a hearing of the House subcommittee on the crisis whether the government should limit the protests that have been taking place across the country.

Fauci said he believed all large gatherings should be limited throughout the pandemic, especially if masks are not being worn, but would not take a stance on the protests, telling the hearing:

“I’m not in a position to determine what the government can do in a forceful way.”

When pressed by Jordan, Fauci went on to say, “I’m not going to opine on limiting anything.”

“There is nothing Dr. Anthony Fauci won’t opine on as long as it doesn’t offend the popular and fashionable left.”

“Fauci is 79, but maybe if he had like 22-year-old kids who were trying to make their way in this world in an economy that is headed down the tubes, thanks largely to his recommendations, he would feel differently … ” Read more.

Fauci: Testing Shortfalls Are NOT His Fault

Lindsay Graham: ‘We Don’t Have A Dr. Fauci Problem’