Lindsay Graham: ‘We Don’t Have A Dr. Fauci Problem’ 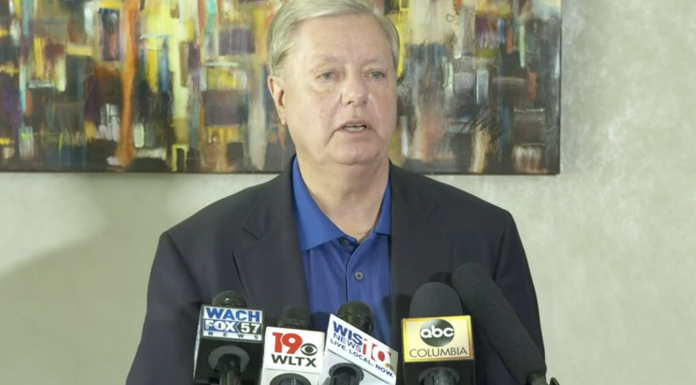 “Getting in a contest with Dr. Fauci about whether he was right or wrong doesn’t move the ball forward.”

Graham: “I have all the respect in the world for Dr. Fauci.”

Headline Health – After a meeting with the South Carolina Hospital Association, Sen. Lindsay Graham responded to a reporter’s question about Dr. Fauci –

Q. Senator, there are reports that the White House is trying to discredit Dr. Fauci [unintelligible] …

A. Well, here’s what I would say about Dr. Fauci. He’s been around a long time. He’s one of the smartest people I know. Has he been right all the time, no.

We don’t have a Dr. Fauci problem. We need to be focussing on doing things that get us to where we need to go.

So I have all the respect in the world for Dr. Fauci. I think any effort to undermine him is not going to be productive, quite frankly.

What I am looking for from the federal government? Phase 4 that hits the target.

Phase 4 that realizes unemployment benefits have to be reshaped because we kinda created an incentive not to work.

A Phase 4 that realizes that testing is a bigger, is a real problem, let’s focus on that.

A Phase 4 that realizes that hospitals need more help, not less,  because the number of cases are going up, so that’s what I’d be focussing on.

Getting in a contest with Dr. Fauci about whether he was right or wrong doesn’t move the ball forward because here we are, here’s where we are as a nation.

The infection rate is going up. We shut the whole country down. It’s time to re-open up smartly. It’s time to go back to school and we’re going to deal with the reality that we’re not as prepared as we need to be but we’ve moving in the right direction.

IN CASE YOU MISSED IT: Fauci CANCELED

COLUMBIA, S.C. (WIS) – After a meeting with the South Carolina Hospital Association regarding their needs amid the COVID-19 pandemic, Senator Lindsey Graham called what he learned an eye-opener.

Graham said he learned the trends that are happening in the state during the pandemic from hospital administrators and ultimately came away with one clear message for citizens across the state.

“I think all of us should do what we can to take the burden off these doctors and nurses and frontline workers.

“What can we do? Everybody on this phone call said that if you would wear a mask when you’re around other people, wash your hands, and practice social distancing, it would have a dramatic impact for the good.”

Although Sen. Graham urged citizens to wear a mask, the U.S. Senator stopped short of supporting a statewide mask mandate.

“Well, if you mandate masks, how do you enforce it?

“I don’t think you’re going to have the mask police go around and write everybody a ticket, but the more you can emphasize wearing masks, the better. The data seems to suggest that states who are aggressive in masking are doing better than those who are not.

“We’ll leave this up to the governor and the cities, but I’ve come away believing three simple things can take a load off hospitals and healthcare providers — masking when you’re around others, washing your hands, and social distancing.”

South Carolina has seen a drastic increase in the number of confirmed COVID-19 cases after some restrictions across the state were lifted.

With that, there have also been concerns about citizens not wearing masks to help slow the spread of the virus.