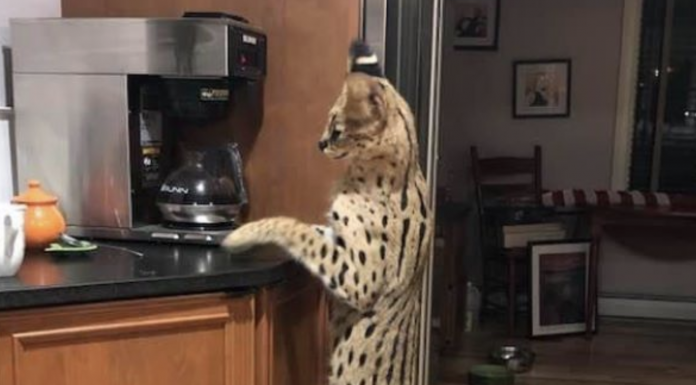 “These wild cats are not much bigger than a medium-size dog, but they retain their wild instincts and are cunning escape artists … definitely not appropriate house pets.” – British Columbia Society for the Prevention of Cruelty to Animals

African predator liberates itself from captors

Residents: Please be on the look out for this missing family pet.

Spartacus is a 40lb, 4 yr old African Serval that is legally owned and permitted through Fish and Game.

He may come when called but tends to be skittish around strangers.

He went missing from his [place of captivity] in the Peaslee Rd area on 09-09-2020 and has not yet been found.

UPDATE: According to social media reports, the escaped cat has been located and returned to captivity.

“These wild cats are … difficult to contain in a home or enclosure setting, and pose a risk to people, children, and other pets.” – BC SPCA

Serval cats are strong, fast and have an incredible capacity for jumping.

In the wild, servals will leap high into the air to catch flying birds, and can slap fish hard enough to stun them. They are not easily house-trained, and will frequently mark their territory with urine.

It is extremely challenging to provide for the nutritional and veterinary needs of a wild cat like a serval in captivity. Without their needs met, they experience poor welfare.

Their breeding is unregulated and animal welfare organizations are not equipped to house these wild cats.

The BC SPCA has always opposed the declawing of cats. Declawing painfully removes the nails and bones of the toes – comparable to amputating human’s fingers at the last knuckle.

In the past, serval cats were declawed when kept as pets, but declawing has since been banned by the College of Veterinarians of British Columbia (CVBC). This means serval cats pose an even greater risk to people and pets in the home.

They may scratch while attempting to play, or out of frustration because their wild needs aren’t met.

The BC SPCA encourages municipalities and governments to adopt exotic pet laws that prohibit the keeping of serval cats.

– British Columbia Society for the Prevention of Cruelty to Animals

Merrimack Man Arrested For Driving Drunk – TO The Police Station

Merrimack Teen Walks Away From Crash, Then Makes One Fatal Mistake …