“[Trump’s] Attention Span Is Like A Minus Number”: Fauci 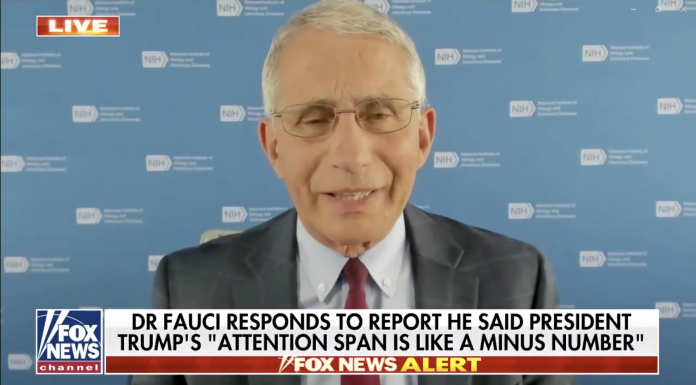 “Don’t ever, ever underestimate the potential of the pandemic. And don’t try to look at the rosy side of things.” – Dr. Anthony Fauci, Sep 10, 2020, Fox News

Business Insider – Dr. Anthony Fauci, the nation’s top infectious-disease expert, is astonished by President Donald Trump’s tendency to hop from one topic to another during meetings and believes Trump has a very short attention span, according to the veteran reporter Bob Woodward’s new book, “Rage.”

The book, a copy of which was obtained by Insider, is set to be released on September 15.

“His attention span is like a minus number,” Fauci said privately of Trump, according to Woodward’s book.

Fauci also told others Trump operated on a “separate channel” and that the president has generally changed the subject when Fauci challenges him, according to the book.

Woodward wrote the infectious-disease expert told an associate that Trump’s “sole purpose is to get reelected.”

Fauci was also disappointed that Jared Kushner, the president’s son-in-law and senior adviser, behaved like a cheerleader for Trump “as if everything was great,” Woodward wrote.

Fauci was initially a leading figure on Trump’s coronavirus task force but became increasingly sidelined amid divisions with the president over how to handle the outbreak.

Fauci has supported quarantines and economic lockdowns to slow the virus’ spread and questioned Trump advisers who pushed for unproven remedies.

Though things between Fauci and Trump were frosty for months, their Cold War went into overdrive in July, when The Washington Post reported a White House official circulated talking points criticizing Fauci for his handling of the virus.

The report added that Trump was irritated about Fauci’s approval ratings … Read more.

“Don’t Try To Look At The Rosy Side Of Things”

Fauci: US needs to be prepared to ‘hunker down’ for fall, winter

Although the number of new daily cases of coronavirus in the U.S. has slowly been declining over the last two weeks, the country is still closing in on 200,000 deaths from COVID-19 and more than 6 million confirmed infections.

“We need to hunker down and get through this fall and winter, because it’s not going to be easy,” Fauci said during a panel of doctors from Harvard Medical School.

Fauci, director of the National Institute of Allergies and Infectious Diseases, also spoke about the COVID-19 vaccine trials and the possibility of post-Labor Day surges, noting that as one region in the U.S. gets it under control, another hot spot emerges — and that spikes inevitably appear whenever states lift social distancing restrictions.

“It’s really quite frankly depressing to see that because you know what’s ahead,” he said.

Fauci, one of the world’s leading AIDS researchers since the 1980s, warned about the dangers of underestimating the virus.

He compared the pandemic it to the early days of HIV when the epidemic started with a few gay men to decades later with tens of millions of deaths and more than 70 million people who have been infected.

“We’ve been through this before,” he said. “Don’t ever, ever underestimate the potential of the pandemic. And don’t try and look at the rosy side of things.”

Fauci’s sobering comments about the need for doctors and scientists to approach COVID-19 with “humility” came a day after President Donald Trump was heard in an audio clip acknowledging in February that he had minimized the seriousness of the pandemic … Read more.