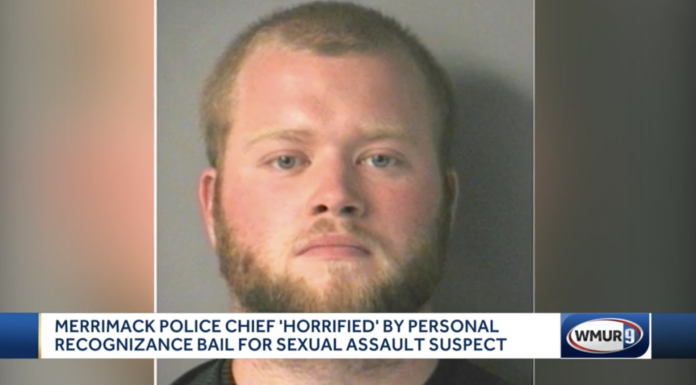 Merrimack man, 22, is accused of having sex with victim under age 16; county attorney defends release |

MERRIMACK, NH  – The police chief of Merrimack said she is frustrated after a sexual assault suspect was released on personal recognizance bail, however the Hillsborough County Attorney defended the agreement between prosecutors and a judge.

[Despite having just 26,490 residents, Merrimack is one of the ten largest cities and towns in tiny New Hampshire.]

Police alleged he has sexual relations with someone under the age of 16 and had obtained sexually explicit images from another minor through texts.

Following his arraignment on Thursday, Chaput was released on personal recognizance bail, and is prohibited from having unsupervised contact with minors.

“I’m dismayed,” said Merrimack Police Chief Denise Roy. “I’m horrified that a defendant with charges of this nature was just allowed to walk out on PR.”

“With him out free, not only is it bad for the victim and the victim’s family but it’s bad for all those people he’s encountered that could be potential victims and God forbid if something happened,” Roy added … Read more.

Merrimack Man Arrested For Driving Drunk – To The Police Station

Merrimack Teen Walks Away From Crash, Then Makes One Fatal Mistake …

PREVIOUS NEWS ON YOUNG VICTIMS OF SEX ABUSE AND TRAFFICKING: