Where Does Your Milk Come From? Must-See Cow Carousel 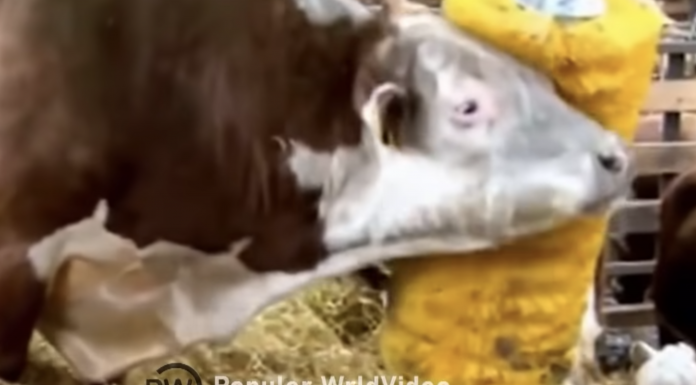 VIDEO: The world’s largest cow factory will give you goosebumps

Ever seen a cow carousel? Cows can’t wait to get on …

CNBC – Like many large businesses, dairy company Arla Foods has grand plans to reduce its greenhouse gas emissions and the firm aims to be carbon net zero by 2050.

Around 85% of Arla’s total emissions come from the co-operative of 10,000 farms it has across Europe, a combination of the methane and nitrous oxide from the cows themselves, as well as from the fuel needed for milking and other operations.

It is hoping one of the ways it will get there is by harnessing one of its most readily-available resources: the manure produced by the half a million cows on its U.K. farms alone.

It is in the middle of a three-month trial looking at the viability of turning manure into fuel for its delivery trucks, working with two farms to collect the raw material that would usually be used by farmers as a fertilizer.

The manure, combined with other materials such as food waste, are put into an anaerobic digester that acts like a cow’s stomach, to produce gas, which is then cleaned and liquified into fuel that Arla then uses to power two of its milk trucks.

Currently, Arla is running the trial with two of its farms in Buckinghamshire, a county northwest of London, said Graham Wilkinson, the company’s agriculture director.

“We collect it off two farms as part of the trial … but we’ve got 2,500 (U.K. farms) to go in the longer term, so there’s definitely the opportunity to scale up. We’ve got plenty of cow manure,” Wilkinson told CNBC by phone.

The U.K. pilot follows a 2019 trial in Sweden, where Arla’s farms have the potential to produce biofuel that is equivalent to 54 million liters of diesel.

That trial showed that running a truck on biofuel is cheaper than using diesel, but the vehicles themselves are more expensive, Wilkinson said. “The ambition would be to go down this (biofuel) route and for it to be more financially viable than diesel. We need to think differently from diesel anyway,” he added … Read more.