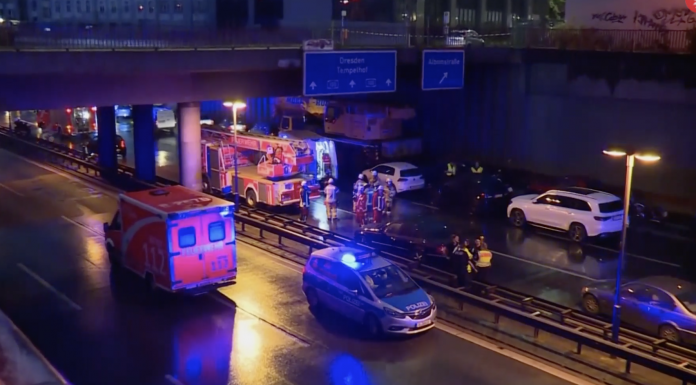 Six were injured, three severely, when 30-year-old motorist drove into series of vehicles |

A man who shouted “Allahu Akbar” has been detained and is being investigated for attempted murder.

The Independent – Prosecutors in Germany suspect a series of crashes that brought a Berlin motorway to a standstill recently was an “Islamist” terror attack.

Six people were injured, three of them severely, when a motorist drove into a number of vehicles along a stretch of the German capital’s motorway in a black Opel Astra.

“According to the current state of our investigation, this was an Islamist-motivated attack,” the local prosecutor’s office said.

The 30-year-old man detained by police officials is Iraqi, according to Germany’s DPA agency.

The series of crashes led to the complete closure of one of the main traffic arteries of Berlin … Read more.

Now, in the wake of the pandemic, states across the country are advancing legislation to curb the powers of public health departments following one of the most destructive and contentious years in American history.
Read more
FEATURED

Steven Brandenburg stated he was skeptical of vaccines in general, specifically Moderna, and told his coworkers his beliefs about vaccines.
Read more
- Advertisement -

Biotech company AquaBounty Technologies Inc. announced that it is harvesting several tons of genetically modified salmon, which will soon be sold at restaurants and other “away-from-home” dining retailers around the country where the federal GMO labeling law does not apply.

“Should I reschedule my mammogram if I recently received the COVID-19 vaccine?”

“The most important thing patients should understand is that there is no danger of breast cancer associated with the COVID-19 vaccine, and you should plan on getting your vaccines as soon as you are eligible.”

Demand for the COVID-19 vaccine has slowed down so much that two states have given millions of doses back to the federal government, even though less than half of their total populations are vaccinated.

Bought And Paid For: Big Pharma Doles Out Campaign Cash To 2,400 Legislators

WASHINGTON — State lawmakers in Oregon have tried to lower high drug prices from nearly every angle: They’ve sought to cap how much people can...

THE GUARDIAN – When the trickle of Olympic athletes arriving in Tokyo turns into a deluge next month, more than 11,000 competitors will find...

Researchers at the University of Central Florida have published a first-of-its-kind study that shows that near-infrared (NIR) spectrum cameras can help hunters more effectively track down these invasive snakes, especially at night.

Biden’s Plan To Give Free Vaccines To The World

MAWGAN PORTH, England (AP) — One year ago, the U.S. was the deadliest hotspot of the COVID-19 pandemic, forcing the cancellation of the Group...
- Advertisement -