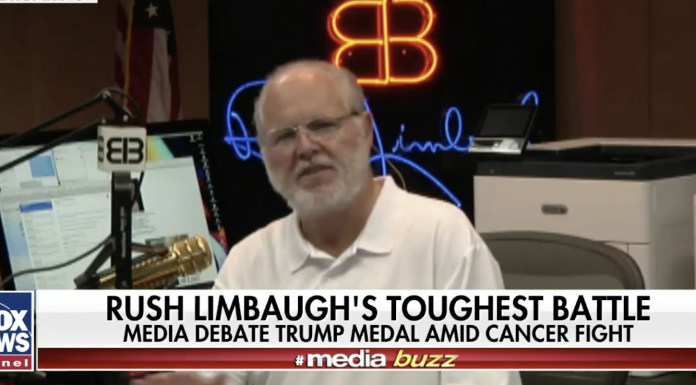 Fox News – Cancer-stricken talk radio legend Rush Limbaugh provided listeners a somber update on his condition Monday after recent scans showed “some progression of cancer,” which he said is “not dramatic” but still a step in the wrong direction.

Limbaugh announced in February that he was diagnosed with advanced lung cancer and had missed several shows this month to undergo treatment.

Limbaugh, who recently hosted President Trump for a two-hour interview, continued the devastating update on his diagnosis.

“It’s tough to realize that the days where I do not think I’m under a death sentence are over,” Limbaugh continued. “Now, we all are, is the point. We all know that we’re going to die at some point, but when you have a terminal disease diagnosis that has a time frame to it, then that puts a different psychological and even physical awareness to it.”

The conservative radio icon then explained that he received bad news earlier this month during treatment.

“The scans did show some progression of cancer. Now, prior to that, the scans had shown that we had rendered the cancer dormant. That’s my phrase for it. We had stopped the growth. It had been reduced, and it had become manageable,” he said. “But there’s always the reality and the knowledge that that can change and it can come back because it is cancer. It eventually outsmarts pretty much everything you throw at it.”