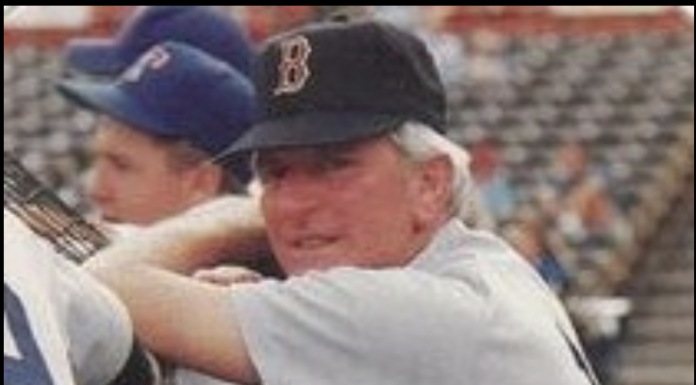 CBS Sports – Former minor-league player and Boston Red Sox manager John McNamara, who managed the club to the 1986 American League pennant, died on Tuesday, his family confirmed to the Boston Globe. He was 88.

Under McNamara, the Red Sox came back from a 3-1 series deficit to beat the Angels and advance to the World Series in 1986. He was criticized for a series of questionable moves in Game 6 of the World Series, including removing Roger Clemens for a pinch-hitter and leaving a hobbled Billy Buckner at first base … Read more.

After spending over 15 years in the minor leagues as a player and player-manager, McNamara helmed six Major League Baseball (MLB) teams for all or parts of 19 seasons between 1969 and 1996.

He directed the 1986 Boston Red Sox to the American League pennant and was named his league’s “Manager of the Year” by both the BBWAA and The Sporting News.

However, the Red Sox were defeated by the New York Mets in seven games in the 1986 World Series when they failed to hold a two-run, two-out, two-strike lead in Game 6, and a three-run advantage in Game 7.

John McNamara’s managerial tactics during the 1986 World Series (especially in the last two games) received much criticism and scrutiny. In the pivotal sixth game, McNamara removed Red Sox ace Roger Clemens in the eighth inning despite the fact that Clemens was still pitching well. Both parties have different stories regarding Clemens’s departure.

According to Clemens, he did not want to leave the game, but McNamara insisted that Clemens asked to be taken out because he had a blister on his pitching hand. McNamara was also criticized for pinch-hitting Clemens with rookie Mike Greenwell, who struck out on three pitches, when veteran slugger Don Baylor was also available.

McNamara’s move was further questioned in light of the relatively poor performances of closer Calvin Schiraldi and longtime reliever Bob Stanley, especially considering that he brought Schiraldi into the game for what was supposed to be a two-inning save and left him in the game for the first two outs of the tenth after he blew the save.

Yet, perhaps the decision that McNamara will be most remembered for is his leaving first baseman Bill Buckner in the game in the 10th inning rather than removing him for a defensive substitute.

McNamara was ridiculed for years afterward for leaving Buckner on the field instead of replacing him with Dave Stapleton, who had previously been used to replace Buckner in late innings for defensive purposes (including Games 1 and 5 of the World Series).

He later said, “I felt Buckner deserved to be on the field when we won.” The Red Sox players also believed that their manager let sentiment overpower his judgment.

Stapleton claimed that “[McNamara] damn well knows that he messed up. And he very well could have cost us the World Series that year.”

McNamara finally responded to Stapleton’s attack in 2011 during an interview with Bob Costas for MLB Network, reneging on his original claim that sentiment was what caused him to keep Buckner in the game and saying that Stapleton had the nickname of “Shaky” because of his poor defense.

With Game 7 delayed a day due to rain in New York, McNamara bumped originally-scheduled starting pitcher Oil Can Boyd in favor of starting Bruce Hurst, the winner of Games 1 and 5 and the presumptive MVP of the series if the Red Sox were to win, on three days’ rest; the Red Sox had chosen to go with a normal four-man rotation during the series, unlike the Mets who pitched a three-man rotation.

The decision upset Boyd so much that he began drinking heavily afterward and drank himself to the point of intoxication, according to accounts given by McNamara and his pitching coach Bill Fischer, thus rendering him unavailable.

Hurst was staked to a 3–0 lead and pitched shutout ball for five innings, but tired in the sixth allowing the Mets to score three runs to tie the game.

Since Boyd’s actions had left the bullpen short-staffed in a situation where every able pitcher would need to be available in case of an emergency, McNamara decided to bring Calvin Schiraldi in despite his struggles in Game 6 and the fact that he was still tired from pitching 2.2 innings that night (something he wasn’t used to).

Schiraldi gave up a tie-breaking home run to Ray Knight, the first batter he faced, and ended up surrendering three runs while recording only a single out. The Red Sox would lose the game 8–5, thus losing the series.

McNamara’s 1987 Red Sox not only failed to repeat as divisional or league champions, they failed to reach .500: at 78 wins, they finished 20 games behind the Detroit Tigers. McNamara was invited to return for 1988, and the Boston bullpen was buttressed by the acquisition of All-Star relief pitcher Lee Smith.

However, the Red Sox played well below expectations and were only 43–42, nine games behind the Tigers, by the July 11–14 All-Star break.

McNamara was fired during the hiatus, and his interim successor, third-base coach Joe Morgan, promptly won 19 of his first 20 games as skipper to pull the Red Sox into a first-place tie with Tigers by August 3. They went on to win the division championship.