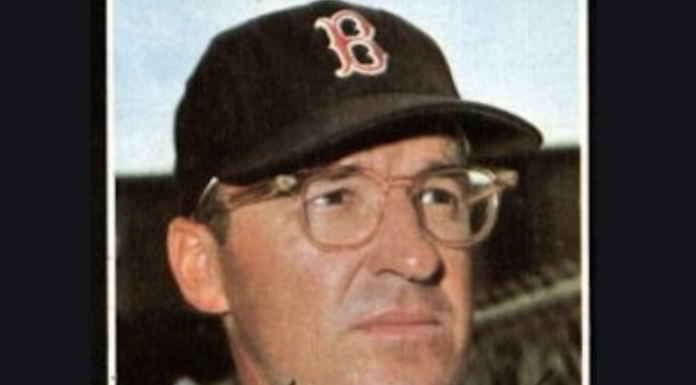 Fox News – Eddie Kasko, a former MLB infielder who was an All-Star during his 10-year career, died Wednesday. He was 88.

The Boston Red Sox, for whom Kasko played in the final year of his career in 1966, announced his passing. No cause of death was initially given.

Kasko served two years in the Korean War from 1952-1954 with the U.S. Army Combat Engineers before making his baseball debut.

He started his career with the St. Louis Cardinals in 1957 before moving on to play for the Cincinnati Reds from 1959-1963. He was selected to the National League’s 1961 All-Star team during a four-year stretch (1959-1962) when Major League Baseball had two such games each year.

The New York Times wrote at the time that having two All-Star Games meant more money for MLB but by 1962 the second game was dropped in lieu of paying the players more … Read more.

From Wikipedia, the free encyclopedia
...article continued below
- Advertisement -

Born in Elizabeth, New Jersey and raised in nearby Linden, Kasko graduated from Linden High School in 1949.[2]

A standout defensive player as a shortstop and third baseman, he began his professional career in 1949. Kasko played for ten MLB seasons (1957–66) with the St. Louis Cardinals, Cincinnati Reds, Houston Colt .45s/Astros and Boston Red Sox. He led National League third basemen in fielding percentage in 1960 and NL shortstops in that category four years later.

Kasko was a right-handed batter who stood 6 feet (1.83 m) tall and weighed 180 pounds (82 kg). He lacked home run power but was a good contact hitter. His career batting average was .264 in 1,077 games and 3,546 at bats. His 935 Major League hits included 146 doubles and 13 triples, as well as 22 home runs. Selected to the 1961 National League All-Star team, he appeared in that year’s second all-star classic, played July 31 at Fenway Park. In the contest, a 1–1 tie shortened by rain, Kasko replaced starter Maury Wills at shortstop in the fourth inning and singled off Don Schwall of the Red Sox in the sixth frame to help the Senior Circuit score the tying run. Hall of Fame shortstop Ernie Banks pinch-hit for Kasko in the eighth inning and replaced him in the field.[3]

Kasko appeared in one World Series—also in 1961, with Cincinnati. He started all five games (the New York Yankees defeated the Reds, four games to one) at shortstop, led the Reds with seven hits (all singles), scored one run, and batted .318. Defensively, he made one error in 27 chances in the field and participated in five double plays.

After the 1966 season, his only campaign with Boston, Kasko retired as an active player and managed the Red Sox’ Triple-A clubs, the Toronto Maple Leafs (1967) and Louisville Colonels (1968–69), to a cumulative 213–213 record and one playoff berth.

He succeeded the popular Dick Williams as Red Sox manager in 1970, and guided the club through four seasons, with mixed results. The Red Sox finished above the .500 mark each season, but only contended in 1972 when they finished a half-game out of first place, behind the Detroit Tigers, in the American League East Division. The half-game differential was partly due to the brief players’ strike that spring: between six and eight games were lopped off each club’s schedule and it was agreed that lost games would not be “made up” to resolve pennant races.

During Kasko’s four-year managerial term, he incorporated young players such as Carlton Fisk and Dwight Evans into the Red Sox lineup, converted relief pitcher Bill Lee into a successful starter, and showed patience with sore-armed veteran Luis Tiant as he returned to form as a dominant pitcher. But when the 1973 Red Sox again could not measure up to the powerful Baltimore Orioles of the era, Kasko was reassigned to an executive scouting position within the organization and replaced as manager by Darrell Johnson upon season’s end on September 30.[4] His final record with Boston, over four seasons, was 345–295 (.539).