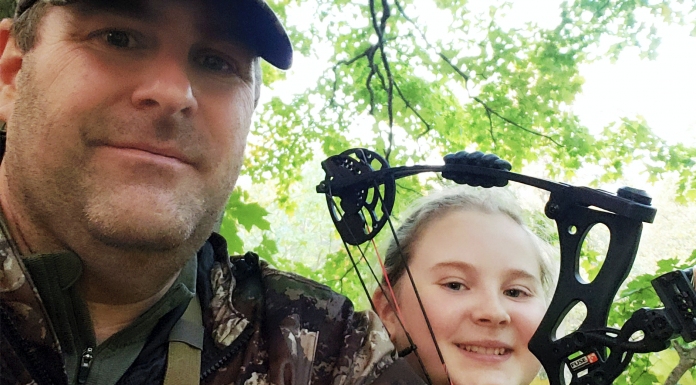 TRAVERSE CITY, Mich. (AP) — Hunting was a big part of Zane Goucher’s youth, when he pursued whitetail deer and ruffed grouse in the Maine woods with his father.

He eventually drifted away from the sport but has returned after a 22-year absence, inspired by the coronavirus outbreak.

Many Americans appear to be doing likewise, as sales of hunting and fishing licenses are spiking in much of the U.S. Weary of being cooped up at home — and of masking and social distancing when they go elsewhere — they’re taking refuge in outdoor sports that offer safety and solitude.

The trend has abruptly reversed a steady decline in hunting’s popularity that once appeared permanent and provided a potential new source of food for families and food banks pressed by the pandemic.

“I’d been meaning to get back into it and just never did,” said Goucher, now a resident of Grand Ledge, Michigan, who headed into the field Sunday with 12-year-old daughter Annabelle as the state’s firearm deer hunting season opened. Lifestyle changes forced by the pandemic, especially online schooling for his four children, “gave me that boost to make it happen.”

“They were getting a lot more screen time than normal, so this was a way to get them outside,” he said. For his part, “it’s a reawakening, kinda gets me back to my roots.”

More than 545,000 hunters in Michigan had bought licenses through Nov. 11, nearly 10 percent more than at the same point in 2019, according to the state Department of Natural Resources. Significantly, the number getting licenses for the first time in at least five years — if ever — has jumped 80 percent, to nearly 84,500.

The state’s total is up 20 percent for female hunters and 18 percent for those ages 9 and younger.

Fishing license sales also have soared. Louisiana’s total in April, shortly after the governor issued a stay-at-home order, nearly doubled that of the same month in 2019. In Idaho, new hunters and anglers are up nearly 30 percent over last year.

The trend appears to be nationwide, although many states won’t have final numbers until the end of the year, said Nick Buggia of the Congressional Sportsmen’s Foundation, which supports outdoor sports caucuses in Congress and state legislatures.

The pandemic almost certainly is a leading factor, Buggia said. The U.S. Fish and Wildlife Service had reported a decline in hunting since the early 1980s. Michigan had lost about 300,000 deer hunters in the previous 20 years, state wildlife biologist Chad Stewart said.

The slump is worrisome to state wildlife regulatory agencies, whose budgets rely heavily on revenue from hunting and fishing license fees. Natural resource managers also depend on hunters to cull overgrown deer populations. Maine boosted its permits this year to control a herd that has swelled in recent years because of mild winters.

But with the virus outbreak, “kids aren’t having sports practices or music lessons, and people working at home have more free time, so it’s been an opportunity for families to reconnect with the outdoors,” Buggia said.

Hunting is ideal for avoiding the virus because participants are outside and usually a good distance apart, said Louis Porter, Vermont’s fish and wildlife commissioner.

“All of the things that hunting offers to people and the varied reasons people hunt all fit in with the pandemic,” he said.

But Vermont officials are discouraging one cherished tradition: deer camp, where hunters from numerous locations can pack into tight quarters for days.

Some new or returning hunters may have a more pressing motive than curing stir-craziness or reconnecting with nature: putting food on the table.

“Any time the economy slows down, there is an increase in hunting licenses as people are interested in pursuing a less expensive food source,” said Eric Lobner, director of Wisconsin’s wildlife management division.

But his organization, which provides venison donated by hunters to food banks and shelters, has seen a 50 percent rise in demand this year.

“With so many people let loose from their jobs or businesses going under, we’ve gotten quite a few more calls for assistance,” Hall said.

Wildlife regulators hope at least some of those who took up hunting during the virus outbreak will continue after it ends.

Claire Grigsby, 14, of Traverse City, Michigan, said she’s enjoying hunting with her dad and helping feed their family, pandemic or no.

“My favorite part is just being able to be in nature and see deer and birds and all kinds of animals,” she said.