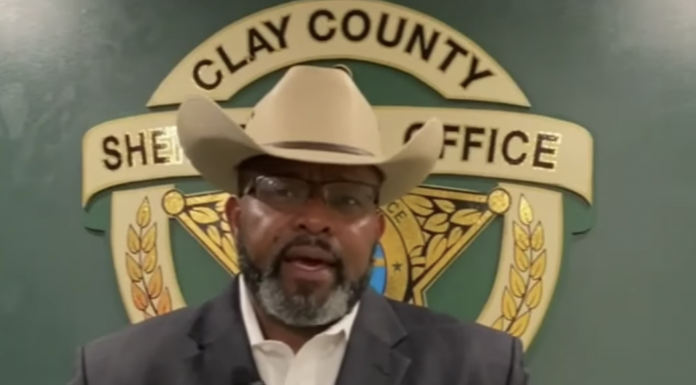 Zipper problems keep leading to the fall of powerful men |

Shefiff he’s ‘fighting for the folks’

Florida Times-Union – Clay County Sheriff Darryl Daniels was arrested Thursday on felony and misdemeanor charges following a year-long investigation into a sex scandal where the sheriff ordered his staff to arrest his mistress.

Daniels decried the arrest, in a video made by Sheriff’s Office employees and emailed by the office, as “dirty politics,” and said any issues with the scandal were personal and didn’t affect his job as sheriff, even though the scandal included an order he gave to staff.

The scandal became public after the Jacksonville Sheriff’s Office, where Daniels previously worked as the jail’s director, announced an internal investigation into a corrections officer with whom Daniels had sex.

The woman, Cierra Smith, resigned while under investigation for misconduct claims.

“I find the timing of the obtaining of a warrant and pressing of charges suspicious in light of an election that’s pending five days from now,” Daniels’ attorney Matt Kachergus told the Times-Union. “It would appear that the timing of this is designed to influence the outcome of that election.”

Daniels was booked in the jail Thursday evening. He was released without bond and within hours released a statement where he criticized the investigation, saying King’s office had offered him a deal if he would agree to resign and not run for re-election.

“I want you to look past the smokescreen of dirty politics,” Daniels said. “One thing I take ownership of as a man is my failures as a husband. That has nothing to do with me as a sheriff … ” Read more.

And over the course of time, I’ve continued to fight for the Sheriff’s Office and the folks who live in this community.

But one thing that’s very suspicious to me is the fact that within days of a primary election the powers that be, specifically the State Attorney’s Office, has decided that today is the day that they will execute their plan and interfere with what’s going on with the sheriff, with me.

Today is the day that they chose to essentially charge me with things that are such – it’s baffling to me because it takes a stretching of the imagination to understand it personally, knowing that I’m innocent.

But I’ll get into one thing, and that’s why I was put in the position in the first place.

Why I decided to go the route that is making local news right now? I just want to read something. And you’ll understand after hearing what I heard or what I was presented with, why I’m making the decision I’m making.

‘2) Prior to Friday,’ and I’m talking about tomorrow, ‘Aug. 14, 2020, the defendant shall file with the supervisor of elections of Clay County, a letter immediately and irrevocably withdrawing from the election of the office of sheriff of Clay County for the 2020 election. The defendant shall forfeit his law enforcement certification to the Florida Department of Law Enforcement.

‘Within the time periods provided by for chapter 106 of Florida state statutes, the defendant shall dispose of all campaign contributions.’

And it goes on and on and on. ‘Not seek or move for sealing or expunging records,’ ‘to pay a fine,’ ‘to waive speedy trial.’

And ‘never run for sheriff in any county in the Fourth Judicial Circuit.’

I made a comment to an interviewer not very long ago, and I said, ‘Y’know there’s dirty politics in Clay County, and I believe I have the answer to stop it.’ It should stop, but sometimes people go to great lengths to achieve a goal or do something that they think they know they think they want to do such as attain a political office.

They may not even know what they’re asking for, and it’s a lot of weight involved in these elected positions. Ask any elected official.

Think about the things we’ve done and successes we’ve had in Clay County since I was sworn in as the sheriff. We’re a safer community, a closer community, and the partnerships and friendships that we’ve fostered and embraced over these years is unparalleled not only in this state but in this country.

I’ve been living here almost 30 years, and in that time, I’ve met some wonderful people and I’ve had the pleasure of working alongside some of the finest men and women that this profession has to offer. I’ve interacted with little children and adults and teachers and businessmen and churches and you name it. Just like everybody else.

The things that I’ve done in my personal life, some of those things were wrong and some things most recently were very wrong. But my job as the sheriff is a different thing.

As the sheriff, there’s one thing that I focus on and that’s keeping you and your family safe and I won’t stop doing that.

The question I want you to ask yourself, and I don’t have the answer to it, is this: why today? Why couldn’t it wait unless there was some ulterior motive behind the decisions to impact a political race?

I thank you for the opportunity to continue being your sheriff. I thank you for the trust you’ve placed n me and the man and women who fight every single day to keep you and your family safe. It’s an honorable responsibility. It’s something that we don’t take for granted.

And we’ll continue fighting, and we’ll continue to keep the gas pedal pressed down, to keep drugs out of our neighborhood, to engage the community, to make Clay County the safest place not only in the state of Florida but across this country if we can, so I want to thank you all, thank you for giving me the opportunity to just talk with you.

I’ll see you real soon. Thank you. [END OF TRANSCRIPT]

ZIPPER PROBLEMS KEEP LEADING TO THE FALL OF POWERFUL MEN:

US Senate Candidate’s Goal For Staffer: ‘Getting Her Laid’

Poll: Hunter Biden’s Burisma Job Was Wrong; How About Getting Stripper Pregnant?