US Senate Candidate’s Goal For Staffer: ‘Getting Her Laid’ 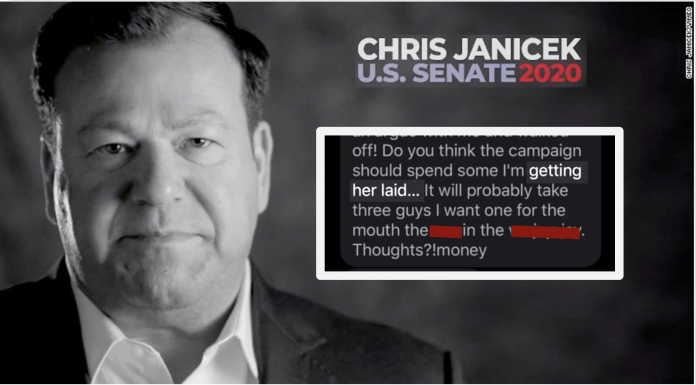 ‘Voters deserve a candidate we can be proud of…’ |

By Managing Editor, Headline USA – Nebraska Democrats endorsed a new U.S. Senate candidate in hopes of pressuring their current nominee to drop out of the race after he sent sexually offensive text messages to a campaign staffer.

Janicek has refused to resign from the race, and state law bars the party from removing him as their nominee without his consent. If Janicek doesn’t withdraw by Sept. 1, his name will remain on the ballot as the party’s nominee in November.

“Voters deserve a candidate we can be proud of and Alisha Shelton is a leader who will fight for those who need health care and good-paying jobs,” said Jane Kleeb, the party’s chairwoman.

Party leaders condemned Janicek, an Omaha cupcake bakery owner, after he made offensive comments in a group text with campaign staffers.

At one point after winning the nomination, Janicek wrote that he had gotten into an argument with a female staffer and asked whether the campaign should spend money on “getting her laid.”

He also made crude references to group sex. The woman who was the target of his remarks was accidentally included on the group text and filed a complaint with the party.

Kleeb said Janicek has “no shot” at beating incumbent Republican U.S. Sen. Ben Sasse, who is seeking a second term, and she argued that Shelton would do a better job of uniting voters.

Even before the scandal, Janicek wasn’t likely to win in Republican-dominated Nebraska.

Shelton was the third-place finisher in the May 12 Democratic primary. After news broke about Janicek’s text messages, many Democrats coalesced around Shelton, including Angie Philips, who finished second in the primary.

However, her loss in the primary prevents her from even running as a write-in candidate unless Janicek withdraws.

“I am ready to fight for all Nebraskans and take on Sen. Sasse this November,” Shelton said.

The local Republican Party chapter in Omaha put it bluntly in a recent tweet: “Nebraska Dems have a dumpster fire on their hands.” Adapted from reporting by Associated Press.

Janicek’s retort: “I am NOT going away”