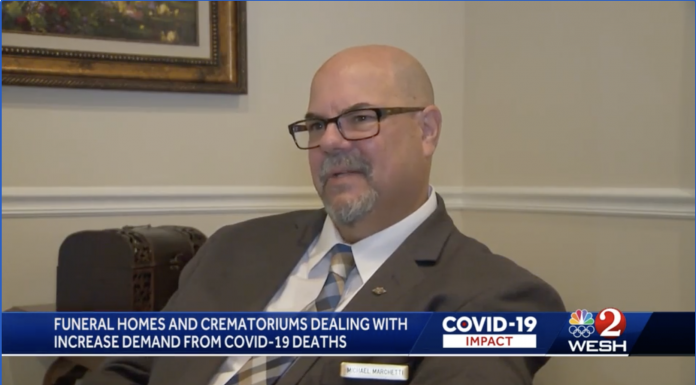 WESH, WINTER GARDEN, Fla. —At West Side Crematory in Winter Garden, they’re overwhelmed with the remains of people that need to be cremated.

There’s an influx of bodies like they’ve never seen, worse than the first wave of COVID-19.

The area where bodies are stored prior to being cremated is stacked to the ceiling. The staff is working day and night to honor the dead.

One funeral director said that in a 30-minute period where he talked to his partner, four new cases came in … READ MORE.

Neither of the Steadmans were vaccinated.

WESH ORLANDO, WINTER HAVEN, Fla. — A Winter Haven woman thought her COVID-19 troubles were coming to an end when she went home from the hospital.

Instead, it was the start of her grief.

The nightmare began when her husband, Ron, tested positive for COVID-19.

“They sent him home with medicine and stuff because he wasn’t in distress or anything. It was just like he had a bad cold,” she said.

Lisa Steadman also came down with COVID-19 and went to the emergency room at Winter Haven Hospital after passing out.

She had also been dealing with other, unrelated illnesses as well.

She spent eight days at the hospital. During that time, her husband had told her his phone was not working properly.

When Ron did not answer her phone call on Tuesday. Lisa assumed his battery had died.

She went home on Wednesday to find him deceased in their bedroom. Their dogs were close to death from lack of food and water.

“I can’t get that picture out of my mind. I wish I never would have found him like that,” she said.