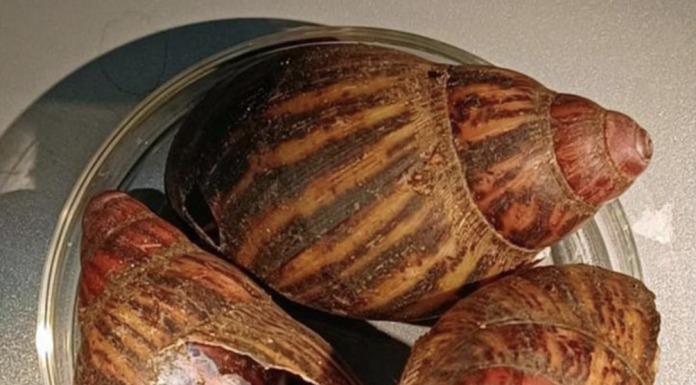 CBS NEWS – A quarter-pound of beef, fresh leaves and 15 live giant land snails — it’s not a recipe, but the confiscated contents of an airline passenger’s luggage earlier this month. U.S. Customs and Border Protection announced the discovery Tuesday, saying that the snails are capable of causing rare forms of meningitis in humans.

CBP said in a statement that the snails were recovered at the George Bush Intercontinental Airport in Houston, Texas.

The passenger who brought the giant land snails, also known as banana rasp snails, was traveling from Nigeria. She initially only declared that she had brought dried beef with her, but later added the snails to her declaration, CBP said.

Agriculture specialists who were inspecting the passenger’s luggage in Houston then found three zip-locked plastic bags that had the live snails inside, along with fresh leaves and about 0.25 pounds of beef, CBP said.

The USDA has taken control of the snails, and said on its website that it is “one of the most damaging snails in the world.” It can grow to be almost 8 inches in length and 5 inches in diameter, about the size of an adult’s fist, the USDA said.

“Because humans are not natural hosts, the parasite cannot complete its natural lifecycle and tends to migrate to various places in the body – usually the brain, and less commonly, the lung.

“The presence of the worm in humans causes significant damage – both from direct damage caused by the worm’s movements and the response of the body’s immune system trying to fight off the worm.

“In the brain, the worm causes a disease called ‘eosinophilic meningitis,’ which is associated with severe headaches, neck stiffness, nausea, vomiting, seizure and weakness.

“Most patients fully recover, but some patients , particularly those infected with many worms, may die due to infection.” SOURCE.