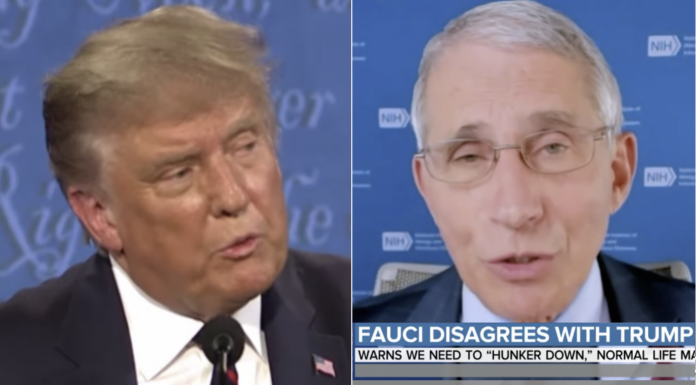 “A conversation does not go by where I do not strongly recommend that people wear masks.” – Dr. Anthony S. Fauci

The New York Times – Dr. Anthony S. Fauci hit back at President Trump on Wednesday for what he called the misrepresentation of his stance on using masks to curb the coronavirus.

In the presidential debate on Tuesday, Mr. Trump claimed that Dr. Fauci initially said “masks are not good — then he changed his mind.”

And when former Vice President Joseph R. Biden Jr. said wearing masks could save tens of thousands of lives, Mr. Trump contended that “Dr. Fauci said the opposite.”

Dr. Fauci, whose relationship with his boss has often seemed tenuous at best, took issue with his claims the day after the debate.

“Anybody who has been listening to me over the last several months knows that a conversation does not go by where I do not strongly recommend that people wear masks,” he said in an interview on ABC News’s “Start Here” podcast.

Dr. Fauci explained that “very early on in the pandemic,” the authorities did not recommend masks to the general public because they were worried about shortages and hoarding. But that changed, he said, as it became clear that asymptomatic transmission was spreading the virus and that masks helped stop it.

“I have been on the airways, on the radio, on TV, begging people to wear masks,” Dr. Fauci said. “And I keep talking in the context of: Wear a mask, keep physical distance, avoid crowds … Read more.

Kaiser Health News  – While the president and vice president forgo masks at rallies, the White House is quietly encouraging governors to implement mask mandates and, for some, enforce them with fines.

The weekly memos, some of which have been made public by the Center for Public Integrity, advocate mask usage for other states and have even encouraged doling out fines in Alaska, Idaho and, recently, Montana.

Masks, a political flashpoint since the beginning of the coronavirus pandemic, are considered by public health officials to be a top safeguard against spreading the COVID-19 virus as the country awaits a vaccine.

But the president’s own actions on masks have wavered: He has called them “patriotic” but often doesn’t wear one himself and has contradicted the advice of the Centers for Disease Control and Prevention director.

During the presidential debate Tuesday, the president said masks were “OK” and then mocked Democratic presidential candidate Joe Biden’s mask-wearing habits. In the audience, some Trump family members and staffers were not wearing masks, despite the rules set by the Cleveland Clinic, which hosted the debate.

“At some point, we have to turn the corner on this ridiculous separation of what we’re being told is best practice and being guided by science and data, and what the actual practices are by the people who issue them,” said Lori Tremmel Freeman, CEO of the National Association of County and City Health Officials.

So far, 16 states have yet to enact mask mandates for the general public — all of them are run by Republican governors. Three out of 4 Americans support enacting state laws to require mask-wearing in public at all times, according to an August NPR/Ipsos poll.

To be sure, messaging and the science on masks have evolved: U.S. public health officials did not recommend mask-wearing until April. And the White House argues the president has been clear.

“He recommends wearing a mask when you cannot socially distance,” White House spokesperson Brian Morgenstern told KHN. “He has worn masks on numerous occasions himself when appropriate and regularly encourages others to do so, as well, when social distancing is not possible.”

The pandemic task force sends weekly memos to states to share data and recommendations with leaders to help them make decisions, Morgenstern added. “They’re free to share that information as they see fit.”

Courtney Parella, a spokesperson for the Trump campaign, said that the staffers check the temperature of every attendee before admission to rallies, provide masks and encourage attendees to wear them, and offer hand sanitizer.

On Sept. 14, Pence stood before a crowd of hundreds in Belgrade, Montana, to stump for the state’s Republicans, including Sen. Steve Daines, gubernatorial candidate U.S. Rep. Greg Gianforte and congressional candidate Matt Rosendale. Photos show that most who attended went without masks, including the vice president, despite a mask order in effect for the surrounding county.

Montana calls on everyone to wear masks at outdoor gatherings of 50 or more people in counties with at least four active cases when attendees don’t stay 6 feet apart.

Photos show people sitting and standing close together at the event in southwestern Montana. Pence signed hats as people gathered shoulder to shoulder by the rails of a crowd divider.

“What would be helpful from the White House is consistency in their recommendations and their actions,” said Matt Kelley, health officer for the Gallatin City-County Health Department. “It’s one thing to make a recommendation to state and local health officials to fine people. It’s made more difficult to do that when we have the vice president coming here to a rally where no one, very few people, were wearing masks.”

During a press call last week, Montana Gov. Steve Bullock said he didn’t plan to follow the White House advice to punish those without masks. The Democrat, who is running for Senate, said it’s better to encourage people to use masks than rely on fines.

But Bullock said the point of the White House’s request was clear. “Even the federal government says we need to be taking wearing masks seriously,” he said. “It’s not just governors saying that we should do this and it’s not just health experts saying we should be wearing masks.”

Missouri Gov. Mike Parson is among the Republican governors who have resisted a statewide masking order, despite the White House’s recommendation.

Spokesperson Kelli Jones said last Thursday that the governor does not plan to enact a mask order, based on an assessment of current COVID data. She added state officials consider the White House reports “really more of an FYI” than a mandate.

“It’s kind of a bizarre document, truthfully,” she said. “We read them and look at them — and make our own policy.”

The reports, which are sent to the governors, also leave local and state public health officials in the dark, said Freeman, of NACCHO.

“One of the many failures of this administration is the politicization of masks, and that has really cost lives,” Frieden said. “There is no reason masks should be partisan.”

Meanwhile back in Montana, Gallatin County appears to be heading toward its third surge in cases since the pandemic began.

“I don’t really have a lot of time to worry about inconsistency of messaging from the White House,” health officer Kelley said.

The county now has outbreaks in nursing homes and several confirmed cases in schools, he said, and the county’s positivity rate is heading toward 10%. Subscribe to KHN’s free Morning Briefing.

Yes, Trump Has A Health Care Plan – He Has Been Implementing It

Prof’s Ugly Words To Trump Voters: “Get Covid And Die”