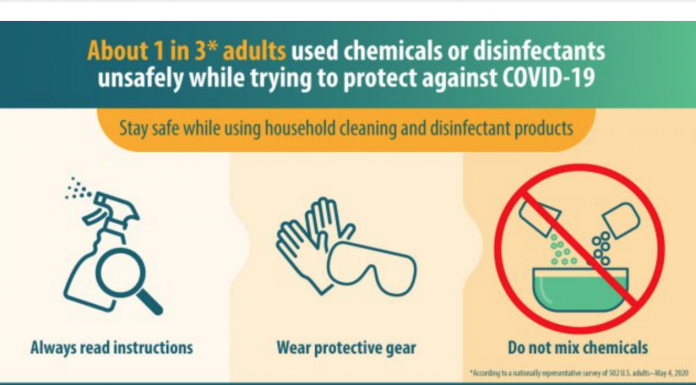 “These practices pose a risk of severe tissue damage and corrosive injury and should be strictly avoided.”

STAT News – To try to kill the novel coronavirus, some Americans are unsafely using disinfectants and cleaners, including washing food with bleach, using the products on bare skin, and inhaling and ingesting them, federal health officials reported Friday.

The findings come from an online survey of 502 adults conducted by the Centers for Disease Control and Prevention in May.

Thirty-nine percent had misused the cleaning products, and one quarter reported “an adverse health effect that they believed was a result” of the products. Further:

The paper does not mention President Trump’s public questioning at a press conference in April of whether an “injection inside” the body of a disinfectant could kill the virus.

His remarks led poison control centers and manufacturers of cleaning products to reiterate that disinfectants and cleaners should not be ingested, inhaled, or injected.

The president later claimed he was trying to prank reporters with his remarks … Read more.