ChiComs Are ‘Endangering The World’ 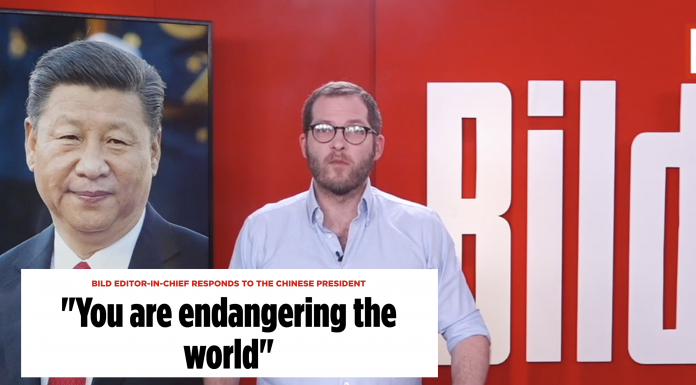 “You, your government and your scientists had to know long ago that the virus is highly infectious, but you left the world in the dark about it.”

BERLIN – The editor-in-chief of Germany’s largest paper Bild on Thursday launched a full-frontal attack on China’s communist president Xi Jinping for his regime’s failure to come clean about the coronavirus outbreak and the massive human rights violations carried out by the communist party.

Julian Reichelt, the prominent editor-in-chief of the Bild, wrote to Jinping that “Your embassy in Berlin has addressed me in an open letter because we asked in our newspaper Bild whether China should pay for the massive economic damage the coronavirus is inflicting worldwide.”

He wrote that, “You [Jinping], your government and your scientists had to know long ago that coronavirus is highly infectious, but you left the world in the dark about it. Your top experts didn’t respond when Western researchers asked to know what was going on in Wuhan.You were too proud and too nationalistic to tell the truth, which you felt was a national disgrace.”

Reichelt said “ You rule by surveillance. You wouldn’t be president without surveillance. You monitor everything, every citizen, but you refuse to monitor the diseased wet markets in your country.You shut down every newspaper and website that is critical of your rule, but not the stalls where bat soup is sold. You are not only monitoring your people, you are endangering them – and with them, the rest of the world.”

He continued with his bill of particulars, noting that:

“surveillance is a denial of freedom. And a nation that is not free, is not creative. A nation that is not innovative, does not invent anything. This is why you have made your country the world champion in intellectual property theft.China enriches itself with the inventions of others, instead of inventing on its own … ” Read more.