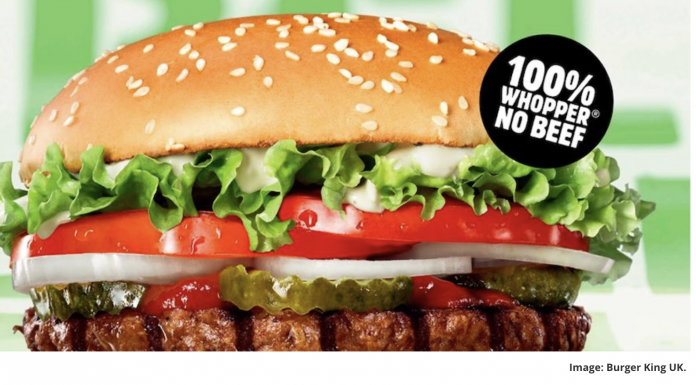 Vegans freak out over this one ‘unsuitable’ burger topping

| The Independent – A series of Burger King advertisements have been banned for incorrectly claiming that the Rebel Whopper is suitable for vegans and vegetarians.

According to the Advertising Standards Authority (ASA), a number of customers complained that three of Burger King’s adverts, published on the company’s social media accounts in January 2020, were “misleading”.

The first advert, which was published on Burger King’s Twitter feed, stated:

“You asked and we listened. Introducing the Rebel Whopper, our first plant-based burger!”

An image of the burger was seen alongside the tweet with a round sticker on the product which stated:

Elsewhere, one of the posts on the Burger King Facebook account stated “taste of being woke” next to an image of the Rebel Whopper burger.

However, customers complained after learning that the Rebel Whopper was not actually suitable for vegans, vegetarians and those with egg allergies because it was cooked alongside meat products and used egg-based mayonnaise.

Following an investigation by the ASA, Burger King explained that small print at the bottom of the adverts stated that the Rebel Whopper may not be suitable for vegans or vegetarians as it was cooked alongside other meat products.

The company added that the information was clearly communicated to journalists and clearly stated on all social media posts and subsequent customer dialogue.

Burger King added that the product itself consisted of a 100 percent plant-based patty supplied by the Vegetarian Butcher and had no beef.

They explained that a customer who did not want mayonnaise could have excluded that from their order.

However, the ASA upheld the complaints and demanded that Burger King ensured they did not misleadingly imply that a product was suitable for vegans and vegetarians if it was not.

“We considered that consumers would understand the claims ‘100 percent Whopper. No beef’ and in particular the claim ‘plant-based burger’ to mean that the burger did not contain any beef or animal products,” an ASA spokesperson said … Read more.

Vegan Activist Goes Back To Meat, Her Health Returns