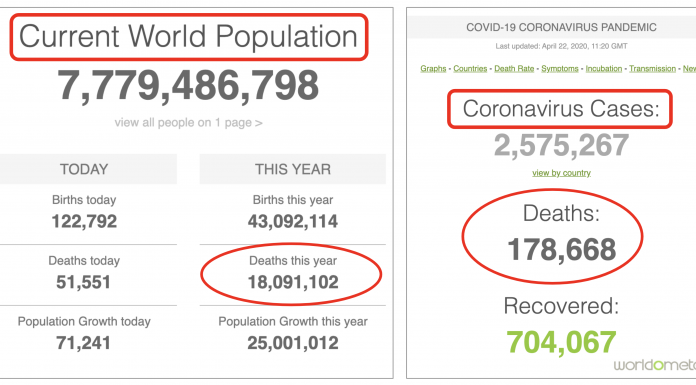 If all 178,668 coronavirus deaths so far had occurred on a single day, the world population still would have grown by 45,612 on that day.

Headline Health – A total of 18,087,481 people worldwide have died from all causes through the first sixteen weeks of 2020, according to World Population Clock estimates.

The number of reported deaths worldwide from COVID-19 is 178,668 since the start of the pandemic, which includes a smattering of deaths in late 2019:

While every life is precious and every death is sad, the facts are COVID-19 is responsible for an increase in global deaths of under one percent, while government response to the pandemic has triggered a chain of devastating economic impacts from widespread unemployment, shut-down of major industries from aviation to energy to hospitality and entertainment, and now, a solemn prediction of widespread starvation.

“There is also a real danger that more people could potentially die from the economic impact of Covid-19 than from the virus itself.”

Details of Beasley’s ominous warning are reported in the CNN story below.

London (CNN) The world is facing multiple famines of “biblical proportions” in just a matter of months, the UN has said, warning that the coronavirus pandemic will push an additional 130 million people to the brink of starvation.

Famines could take hold in “about three dozen countries” in a worst-case scenario, the executive director of the World Food Programme (WFP) said in a stark address on Tuesday. Ten of those countries already have more than 1 million people on the verge of starvation, he said.

He cited conflict, an economic recession, a decline in aid and a collapse in oil prices as factors likely to lead to vast food shortages, and urged swift action to avert disaster.

“While dealing with a Covid-19 pandemic, we are also on the brink of a hunger pandemic,” David Beasley told the UN’s security council. “There is also a real danger that more people could potentially die from the economic impact of Covid-19 than from the virus itself.”

The WFP had already warned that 2020 would be a devastating year for numerous countries ravaged by poverty or war, with 135 million people facing crisis levels of hunger or worse. Their updated projections nearly double that number.

When added to the 821 million people already chronically hungry, that scenario would push more than 1 billion people into dire situations.

The agency identified 55 countries most at risk of being plunged into famine in its annual report on food crises, released this week, warning that their fragile healthcare systems will be unable to cope with the impact of the virus … Read more.