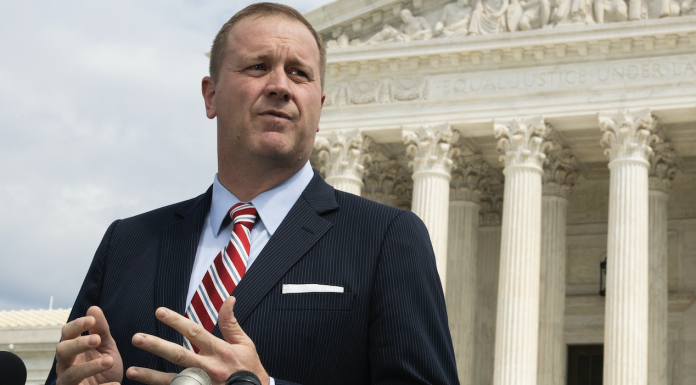 “Nurses and doctors are forced to quarantine from their families, our elderly citizens are stuck in nursing homes away from loved ones … “

BEIJING (AP) — China on Wednesday slammed a lawsuit brought against it by the U.S. state of Missouri over the coronavirus pandemic as “very absurd.”

Foreign ministry spokesman Geng Shuang said the legal action has “no factual and legal basis at all” and repeated China’s defense of its response to the outbreak, which has largely subsided in the country where it was first detected.

The ministry and other Chinese government departments have strenuously denied accusations that officials delayed reporting on the extent of the outbreak in the central Chinese city of Wuhan late last year, despite reports that worries over political stability were placed above public health concerns.

Medical staff who reported the outbreak were silenced under threat of legal retaliation and Wuhan went several days without reporting cases during the holding of an annual provincial government conference.

“This so-called lawsuit is very absurd and has no factual and legal basis at all,” Geng said at a daily briefing. Since the outbreak began, China has proceeded in an “open, transparent, and responsible manner” and the U.S. government should “dismiss such vexatious litigation,” he said.

Missouri’s top state prosecutor on Tuesday announced the lawsuit, which alleges that Chinese officials are to blame for the pandemic that has sickened around 2.5 million worldwide, thrown tens of millions out of work and devastated local economies, including in China.

Attorney General Eric Schmitt said the Chinese government lied about the dangers of the virus and didn’t do enough to slow its spread.

Missouri’s action is likely to be largely symbolic, however, since lawsuits against other countries typically don’t go anywhere because U.S. law generally prohibits them.

According to Johns Hopkins University’s Center for Systems Science and Engineering, the number of Missouri deaths from the virus rose by 16 Tuesday to 215.

In a historical move, Missouri Attorney General Eric Schmitt filed a lawsuit today against the Chinese government, Chinese Communist Party, and other Chinese officials and institutions, alleging that their actions to suppress information, arrest whistleblowers, and deny the contagious nature of the 2019 novel Coronavirus led to loss of life and severe economic consequences in Missouri.

“COVID-19 has done irreparable damage to countries across the globe, causing sickness, death, economic disruption, and human suffering. In Missouri, the impact of the virus is very real – thousands have been infected and many have died, families have been separated from dying loved ones, small businesses are shuttering their doors, and those living paycheck to paycheck are struggling to put food on their table.”

“The Chinese government lied to the world about the danger and contagious nature of COVID-19, silenced whistleblowers, and did little to stop the spread of the disease. They must be held accountable for their actions.”

The lawsuit, filed [Tuesday] in the U.S. District Court for the Eastern District of Missouri, alleges:

“During the critical weeks of the initial outbreak, Chinese authorities deceived the public, suppressed crucial information, arrested whistleblowers, denied human-to-human transmission in the face of mounting evidence, destroyed critical medical research, permitted millions of people to be exposed to the virus, and even hoarded personal protective equipment (“PPE”)—thus causing a global pandemic that was unnecessary and preventable.”

According to the lawsuit, by late December, Chinese health officials had serious evidence of human-to-human transmission.

The lawsuit also alleges that, despite having knowledge of the disease, Chinese officials did little to contain the spread.

According to data gathered by the New York Times, nearly 175,000 individuals left Wuhan on January 1 alone to travel for the Lunar New Year. The Chinese government also continued with New Year celebrations, despite the risk for potential further infections.

Chinese officials’ alleged coverup and silencing of whistleblowers is also noted in the lawsuit. On January 1 or 2, Wuhan police stated in a message that was broadcast across the country on CCTV that they had taken “legal measures” against eight people who published and shared “rumors” online.

One of those eight is believed to be a doctor that shared information about the disease on a platform called WeChat. One doctor in a Wuhan hospital emergency room was disciplined for instructing staff to wear masks, suspecting human-to-human transmission.

The lawsuit notes the immense negative impact that COVID-19 has had on Missourians, pointing out the unprecedented number of jobless claims, the impact on Missouri’s unemployment rate, and the impact on the State’s budget now and in the future.

On the human side – Missouri’s nurses and doctors are forced to quarantine from their families, our elderly citizens are stuck in nursing homes away from loved ones, and more.

The key factual allegations can be found here.

ALSO ON HEADLINE HEALTH TODAY: Covid-19 Behind Only 1% Of Deaths | These FL Beaches Are NOT Opening | Trump’s Virus Response ‘Dangerous’: Bill Gates