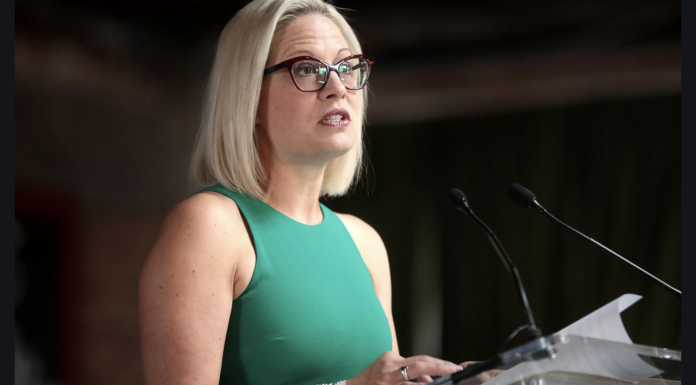 Soon after that, employees of pharmaceutical companies donated $35,000 to her campaign committee.

Each of those companies has invested heavily in personalized medicine, which promises individually tailored drugs that can cost a patient hundreds of thousands of dollars.

Sinema is a first-term Democrat from Arizona but has nonetheless emerged as a pharma favorite in Congress as the industry steers through a new political and economic landscape formed by the coronavirus.

She is a leading recipient of pharma campaign cash even though she’s not up for reelection until 2024 and lacks major committee or subcommittee leadership posts.

For the 2019-20 election cycle through March, political action committees run by employees of drug companies and their trade groups gave her $98,500 in campaign funds, Kaiser Health News’ Pharma Cash to Congress database shows.

That stands out in a Congress in which a third of the members got no pharma cash for the period and half of those who did got $10,000 or less.

The contributions give companies a chance to cultivate Sinema as she restocks from a brutal 2018 election victory that cost nearly $25 million.

Altogether, pharma PACs have so far given $9.2 million to congressional campaign chests in this cycle, compared with $9.4 million at this point in the 2017-18 period, a sustained surge as the industry has responded to complaints about soaring prices.

Sinema’s pharma haul was twice that of Sen. Susan Collins of Maine, considered one of the most vulnerable Republicans in November, and approached that of fellow Democrat Steny Hoyer, the powerful House majority leader from Maryland.

It all adds up to a bet by drug companies that the 43-year-old Sinema, first elected to the Senate in 2018, will gain influence in coming years and serve as an industry ally in a party that also includes many lawmakers harshly critical of high drug prices and the companies that set them.

“This is a long-term play,” said Steven Billet, a former AT&T lobbyist who teaches PAC management at George Washington University.

“She’s more of a moderate than people are giving her credit for. If I’m a pharmaceutical guy, I’m saying, ‘You know what? Maybe this is somebody we can work with down the road.’”

The industry’s pivot to Sinema comes as powerful favorites such as former Sen. Orrin Hatch of Utah and retiring Rep. Greg Walden of Oregon, both Republicans, fade from the scene.

These days, representing traditionally conservative Arizona statewide, she portrays herself as a moderate.

She favors better medical coverage by improving the insurance company-friendly Affordable Care Act, for example, not by scrapping it in exchange for “Medicare for All.”

“Sinema is a talented politician who knows where she needs to be politically and will get there,” said Nathan Gonzales, editor of Inside Elections, a nonpartisan newsletter.

Sinema’s spokesperson did not respond to queries from KHN.

First elected to the U.S. House in 2012, she has a history of supporting pharmaceutical and biotech firms, dozens of which have operations in Arizona.

Her acceptance of drug industry campaign contributions sets her apart from Democrats such as Sen. Cory Booker of New Jersey who have pledged to reject pharma money, not to mention those who spurn all corporate cash.

“The Republican Party tends to be more receptive to pharma cash,” said Paul Jorgensen, a political science professor at the University of Texas Rio Grande Valley, who analyzes campaign finance. “You’re going to see divisions within the party on pharma on the Democratic side.”

In 2017 Sinema introduced a House bill, strongly supported by the Biotechnology Innovation Organization trade group, that would have eased financial regulation on publicly traded biotech firms with little revenue. The measure has not become law, but two weeks later BIO named Sinema “Legislator of the Year,” calling her a “stalwart advocate” for life sciences jobs.

“We welcome the opportunity to work with any policymaker who understands the value of science, the risks, costs and challenges of developing new medicines, and the need to ensure patients have access to medicines with out-of-pocket costs they can afford,” BIO spokesperson Brian Newell said.

Sinema portrayed her backing of a 2016 measure to accelerate the introduction of scarce generic drugs as a blow against high drug costs. A version became law the next year. But support for the bill by the Pharmaceutical Research and Manufacturers of America, the main brand-drug lobby, prompted some to question its potential to bring down overall drug prices.

Sinema was a strong advocate of the biggest overhaul of over-the-counter drug regulation in almost half a century. The measure became law in March with little public notice as part of the CARES Act to rescue the economy and fight the coronavirus. It gives the Food and Drug Administration new leeway to move against possibly dangerous drugs, sets up industry fees to pay for accelerated reviews and creates incentives to bring new medicines to market.

The new system resembles the user-fee financing of regulation for prescription drugs. But making the FDA dependent on drug company money for OTC oversight — subject to periodic negotiation with industry — makes the agency beholden to the companies it oversees, said David Hilzenrath, chief investigative reporter for the Project on Government Oversight, a watchdog nonprofit.

Personalized medicine — also known as precision medicine — promises to use genetic characteristics and other traits to identify which treatments are best for a particular patient.

“Raising awareness of the benefits of personalized medicine helps detect and prevent diseases, while making health care more affordable and accessible for Arizona families” was Sinema’s quote in the press release.

But affordability has not been a hallmark of personalized medicine so far. Like other recent pharma products, genetically targeted medicines and tests can come with extremely high prices while sometimes delivering mediocre benefits, health policy analysts say.

One of the best-known precision medicines is Merck’s Keytruda, used against a variety of cancer tumors with certain genetic profiles. It costs more than $100,000 a year.

“It’s a good drug,” said Vinay Prasad, an associate professor at the University of California-San Francisco who studies health policy and cancer drugs. “But behind it is a marketing machine that is trying to maximize its use.”

In any case, personalized medicine generally “has been a mixed bag,” with prices for cancer drugs that are “universally horrendous,” he said. Industry enthusiasm may be “motivated by the fact that when something is called precision or personalized, the regulatory bar needed to approve it is lower,” he added. “And that is often good for profits.”

Kaiser Health News (KHN) is a national health policy news service. It is an editorially independent program of the Henry J. Kaiser Family Foundation which is not affiliated with Kaiser Permanente.