A Hospital Finds an Unlikely Group Opposing Vaccination: Its Workers 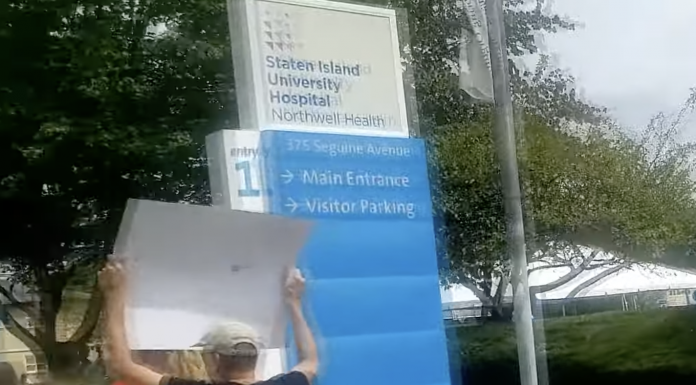 When a Staten Island hospital implemented a vaccine or testing mandate, some of its staff staged angry protests.

THE NEW YORK TIMES – Their movement started discreetly, just a handful of people communicating on encrypted apps like WhatsApp and Signal. But in just days it had ballooned tenfold.

And within two weeks, it had turned into a full-blown public protest, with people waving picket signs to denounce efforts to push them to receive coronavirus vaccines.

But these were not just any vaccine resisters. They were nurses, medical technicians, infection control officers and other staff who work at a hospital on Staten Island, which has the highest rate of Covid-19 infection of any borough in New York City.

Outside Staten Island University Hospital this week, as passing cars and fire trucks honked supportively, employees chanted, “I am not a lab rat!”

The aggressive opposition to the vaccine, and even regular testing, at a hospital in New York City — the epidemic’s onetime epicenter — shows the challenges of reaching the unvaccinated when some of the very people who could serve as role models refuse vaccination.

Some medical workers at the Staten Island hospital are so fiercely opposed that they call themselves “The Resistance” after the rebel faction in “Star Wars.”

They are defending what they view as their inherent rights, and their leader is gathering hospital workers from other states in an attempt to create a nationwide movement.

Scientists and medical professionals point out that those who refuse vaccines are potentially endangering the lives of patients.

“Vaccinations are critical to protect our patients, our staff and protect the general community.

“It’s a tough issue, but it’s our professional obligation to always maintain that whatever we do, it’s for the safety of our patients … ” READ MORE.