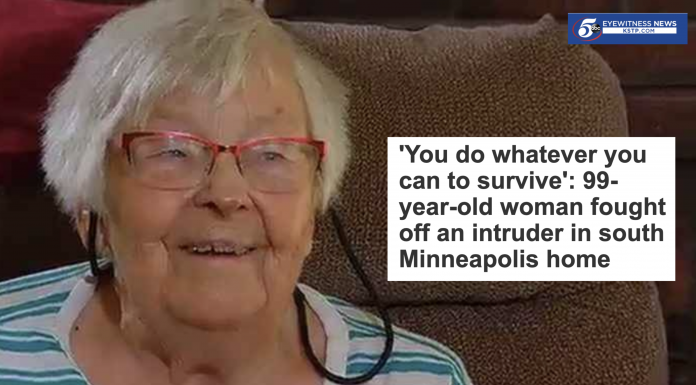 “I am surprised when I think that I’m 99 years old and was able to work off that strong, young man. God was with me.” – Evelyn Johnson

KTSP CBS 5 – A 99-year-old woman fought off an intruder at her home in South Minneapolis.

Minneapolis Police Department confirmed to 5 EYEWITNESS NEWS they are searching for a suspect in this violent break-in.

“You do whatever you can to survive,” said Evelyn Johnson, the victim in this case.

Johnson said a man snuck into her home through a back window around 10 a.m. on Monday and then attacked her, covering her head with a blanket.

“I think he was surprised,” Johnson recalled. “He thought he was just going to cover my mouth and smother me, but that didn’t happen. I fought him. We wrestled for quite a while, according to all my bruises.”

Johnson said the suspect ultimately shoved her into the bathroom and shut the door, making off with about $40 and an iPad.

“She wasn’t going to let him take her down and she fought for her life,” said Barbara Johnson, Evelyn’s daughter. “That really is incredible. At 99 and a half, I don’t know where she got the strength.”

Police confirmed they are looking for a suspect in this case but are not putting out further details at this time.

Minneapolis Police Department is warning about an increase in crime, downtown and in South Minneapolis.

They said officers have responded to 100 robberies and 20 carjackings in the 3rd precinct in July alone, with most of the crimes happening north of 42nd Street East.

Police said thieves are stealing cell phones, purses and vehicles. They said some of the victims have been maced, dragged, assaulted and threatened with guns.

According to MPD crime statistics, there have been 909 robberies in Minneapolis this year, a 37% increase from last year.

“The 3rd precinct is my home and what’s going on is kind of a shame,” Barbara Johnson said. “The fact that we’ve been violated here is really a sad reflection of what’s going on.”

Evelyn’s hearing aid was crushed in the scuffle with the intruder, which will likely cost her thousands of dollars … Read more.

Here’s what a Minneapolis without police could look like

The city is at a crossroads when it comes to the future of public safety.

Star Tribune – Minneapolis is at a crossroads when it comes to the future of public safety in the wake of the police killing of George Floyd. The burning of the Third Precinct sent a stark message that despite years of incremental reforms, radical change must happen now.

The beginnings of change are already underway in some instances — the Minneapolis City Council proposal to change the city’s charter to remove the requirement for a police department is one example. In its place, the city would create a Department of Community Safety and Violence Prevention — prioritizing a community-led, holistic approach to public safety — which may or may not include police.

“Changing the city charter will remove barriers that can get in the way of us as elected officials making sure that the best solutions brought forward by our community can be brought to life,” said Minneapolis City Council member Philipe Cunningham.

When it comes to the future of policing in Minneapolis, there are a lot of options on the table. Reform, defund and abolish are terms that appear frequently in these conversations — but what does each really mean? … Read more.