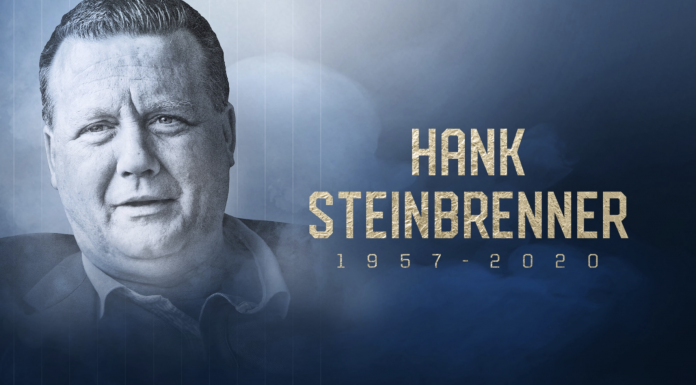 YANKEES.COM – The New York Yankees mourn the passing of General Partner and Co-Chairperson Henry G. “Hank” Steinbrenner, who passed away earlier today at his home in Clearwater, Fla., from a longstanding health issue. Mr. Steinbrenner was 63.

“Hank was a genuine and gentle spirit who treasured the deep relationships he formed with those closest to him,” said the Steinbrenner family.

“He was introduced to the Yankees organization at a very young age, and his love for sports and competition continued to burn brightly throughout his life. Hank could be direct and outspoken, but in the very same conversation show great tenderness and light-heartedness.

More than anything, he set an example for all of us in how comfortably he lived enjoying his personal passions and pursuits. We are profoundly saddened to have lost him and will carry his memory with us always.”

Born April 2, 1957, and raised in his birthplace of Cleveland, Ohio, Mr. Steinbrenner was the eldest of four children by former Yankees Principal Owner George M. Steinbrenner III and his wife, Joan (pronounced Jo-Ann).

Mr. Steinbrenner was in his 13th season as a General Partner of the New York Yankees and his 11th season as Co-Chairperson of the club.

Along with Managing General Partner/Co-Chairperson Hal Steinbrenner, Hank was responsible for overseeing all areas of the club’s business and baseball operations, and was directly involved in player negotiations, long-term player recruitment goals and overall club strategy.

He spent many decades passionately involved in the breeding, raising and racing of horses, serving as a Vice President and Director of Bay Farms Corporation since 1985 and as a longtime member of the board of the Ocala Breeders Sales Company.

Mr. Steinbrenner attended Culver Military Academy and Central Methodist College in Missouri. Over the course of his career, he held additional roles as chairman of Minch Transit Company and vice president of Mid-Florida Hotels Corporation.

Steinbrenner is the eldest son of famous Yankees owner and chairman George Steinbrenner, who died in 2010, and brother to Yankees principal owner and managing partner Hal Steinbrenner.

Steinbrenner was known to be outspoken and colorful character when he was involved with the team. Back in 2008 he called Red Sox Nation “a bunch of bull—-.”

“That was a creation of the Red Sox and ESPN, which is filled with Red Sox fans,” he told the New York Times’ Play magazine, via ESPN. “Go anywhere in America and you won’t see Red Sox hats and jackets, you’ll see Yankee hats and jackets. This is a Yankee country. We’re going to put the Yankees back on top and restore the universe to order.”

Hank and Hal both inherited the team when their father died in 2010, but Hank had previously started to step back from any role he had with the team due to health problems. Hal took over the day-to-day operations of running the team and became the public face of the franchise. Read more.

Move All 30 MLB Teams To 1 State To Save Season?