Woman Attacked At Staples After Asking Customer To Wear Mask 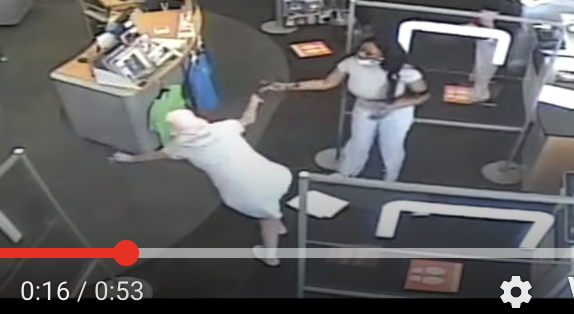 N.J. woman assaulted at Staples over mask request: ‘I lifted my cane to keep her away’ |

NJ Advance Media for NJ.com – Margot Kagan, a recent liver transplant recipient assaulted after asking someone to wear a face mask, has a message for her attacker.

“I hope they catch her. I’d like to see her spend a couple nights in jail,” Kagan, 54, told NJ Advance Media from her hospital bed on Saturday.

Kagan, a single mother of two teenagers from Teaneck, has been at Hackensack University Medical Center since Wednesday, when she was shoved to the ground while faxing paperwork from Staples in Hackensack.

“I said, ‘you’re endangering everyone by not wearing your mask’ and I put my head down and went back to faxing at the machine,” she said.

Security video from a store camera shows the suspect walk around a plastic divider and confront Kagan.

“Next thing I know, she’s two feet away from me, screaming at me,” Kagan said. “I really didn’t understand what she was saying. I lifted my cane to keep her away from me.”

Video shows the suspect grabbing the frail woman and throwing her to the floor. “My knee broke while I was falling. I later learned it was my tibia,” Kagan said.

Moments after the attack, the video shows the woman walking out of the store, leaving Kagan on the floor and customers and employees standing nearby, stunned.

Kagan, who wore a mask and face shield into the store, said she spoke up to the woman because she is had a liver transplant in March – after being on a waiting list for two years – and that she fears contracting COVID-19.

“She’s on quite a few immunosuppressant drugs,” said her brother, Bruce Kagan. “She’s a cancer survivor, too, so she doesn’t have the strongest constitution.”

“This had me crying, just watching it and thinking about it,” Bruce Kagan said. “The whole family was upset and mortified … ” Read more.