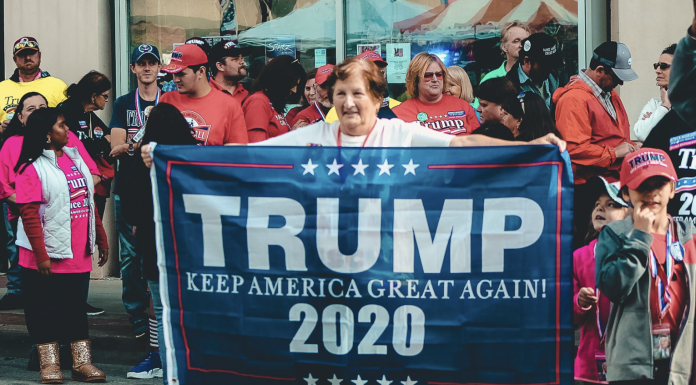 “We can’t wait to get back out there and [campaign] the old-fashioned way.” – Lara Trump

A piece in the New York Post argues that COVID-19 is not a deal-killer for Donald Trump’s second term. An Associated Press analysis raises troubling issues for the president’s re-election bid. Who’s right? Check these dueling opinions, then post your own below.

Why coronavirus will not cost Trump reelection

NY POST – Last fall, as the House impeachment wave was building, I asked a gathering of 10 friends what they thought of President Trump’s prospects.

Only six were Trump voters in 2016, but the group was unanimous on two points: The president would not be convicted by the Senate and would be re-elected in 2020.

Because the world has been turned upside down since then, I wanted an update from the same group. All successful New Yorkers, they are active in business, philanthropy and politically astute.

Like everyone else, they recoil at the deaths engulfing the nation and our city, and are horrified by the economic destruction being imposed in a bid to save lives. They worry about their own health, their families, friends and neighbors.

Although they hardly represent a scientific sampling, their views on the president, his handling of the epidemic and the fall election are not markedly different from public polls. In general, the group’s opinion of Trump’s leadership is good news for the president.

He’s picked up at least one new voter — a woman who says Trump has been a much better president than she expected. So far, he hasn’t lost any supporters, though one unhappy backer says he is open to voting for Joe Biden, depending on Biden’s choice of a running mate.

Although several in the group express uncertainty about whether Trump will win a second term because of the coronavirus and economic impact, not a single one is convinced the president will lose, largely because they all see Biden as weak and in obvious decline. Even those who reflexively back Democrats doubt that Biden can win.

Yet when I asked all 10 to grade Trump’s performance, there was a wide range of assessments and even his supporters were not always happy.

Only three give him an “A,” with two citing his success in getting the private sector involved in producing equipment for front-line health workers while also spurring the government bureaucracy to speed its approvals and trim regulations … Read more.

NEW YORK (AP) — The coronavirus is poised to reshape the political map, pummeling battleground states and alarming Republicans who see early signs of an election that could be a referendum on President Donald Trump’s management of the crisis.

The pandemic, which has killed more than 30,000 Americans and left millions out of work, has eviscerated Trump’s hope to run for reelection on a strong economy. A series of states he won in 2016 could tilt toward Democrats.

In Florida, a Republican governor closely aligned with Trump has come under scrutiny for being slow to close the state. In Wisconsin, the Democratic victor in last week’s Supreme Court race captured 28 counties, up from the 12 that Hillary Clinton won four years ago.

In Michigan, a Democratic governor has seen her approval rating rise against the backdrop of a fight with Trump. And in Arizona, low marks for Trump could be enough to turn the formerly Republican stronghold into a tossup.

“It makes me wonder if there’s something brewing in the weaker elements of the Trump base,” said Paul Maslin, a Wisconsin-based Democratic pollster. “Is the pandemic fight the final straw that’s going to cause some of this small slice of votes he needs to win these states to back away?”

Trump’s public approval rating has remained consistent nationally throughout his presidency, and some polls even suggested an uptick at the onset of the pandemic. And his unique brand of politics rooted in cultural grievances could once again overcome hurdles that would sink other presidents seeking reelection, especially if the pandemic wanes or the economy rebounds.

But Trump’s campaign is concerned about losing support in several key swing states, particularly Florida and Wisconsin, according to five current and former campaign staffers who spoke to The Associated Press on the condition of anonymity because they were not authorized to speak publicly about internal strategy. There are also growing worries about Arizona and Pennsylvania.

There is no better example of the altered map confronting Trump than Michigan, which he captured in 2016 by fewer than 11,000 votes.

The mounting deaths in heavily African American Detroit and the politically dynamic suburban counties have been the backdrop for the tiff between Gov. Gretchen Whitmer and Trump.

Though her handling of the virus outbreak has prompted some public protests, Whitmer’s poll numbers have gone up and her criticism of the federal response prompted Trump to obliquely dismiss the governor, telling virus task force members “Don’t call the woman in Michigan.”

In a sign of enthusiasm, participation in Democrats’ March primary was up 32% over 2016 as the party rallied around its likely nominee, former Vice President Joe Biden. The Trump campaign already had a light footprint in Michigan — it does not have a single field office — and advisers privately concede it could be the toughest battleground state to hold.

Many pollsters believe Wisconsin could be the tipping point this November for either candidate to reach the needed 270 electoral votes.

“We are starting to see more evidence that suburban voters disapprove of the way Trump is handling the coronavirus pandemic,” said Democratic strategist Adrienne Elrod, who notes that counties outside Philadelphia and Phoenix “have a similar electorate to the suburban areas that delivered a huge win for Democrats in Wisconsin.”

Although the state Supreme Court race received national attention, Republicans were quick to dismiss it since only Democrats held a competitive presidential primary, boosting that party’s turnout.

Wisconsin’s spring Supreme Court contests have been a shaky predictor of presidential elections, which usually feature twice as many voters.

“President Trump has been clear — through actions and words — that what matters most is the health and safety of every American. This crisis is hitting Americans — not Democrats or Republicans,” said Trump campaign spokeswoman Erin Perrine. “To try and politicize this crisis in terms of the election is ludicrous.”

Although Arizona hasn’t yet seen a spike in infections, Biden’s promise of pragmatic, experienced management may play well in a state that has turned purple. A Biden victory there would build pressure on Trump to hold two of the trio of Wisconsin, Michigan and Pennsylvania.

The pandemic has hamstrung the Trump campaign’s effort to build momentum. Though its digital outreach has ramped up, the campaign has been unable to wield its financial advantage over Biden and can’t hold its signature rallies to bolster enthusiasm and collect valuable voter data.

“We can’t wait to get back out there and do things the old-fashioned way,” said Lara Trump, a senior campaign official and the president’s daughter-in-law.

Employment has cratered in many of the states key to Trump’s reelection.

The economy shed 22 million jobs in the past four weeks, according to requests for unemployment benefits. And while some of those jobs will return as the lockdown gets lifted, it’s unclear how quickly workers will be needed at hotels in Florida, auto plants in Michigan and stores and offices that fill Pennsylvania, Wisconsin and Arizona.

Both Michigan and Pennsylvania have lost more than 1 million jobs since the outbreak, which implies unemployment rates of more than 20% in both states, according to Labor Department figures.

Unemployment filings suggest Florida employers have let go of roughly 6% of its jobs, but declines there could worsen as applicants have struggled to access unemployment benefits.

Without Florida, Trump’s path to victory becomes nearly impossible. Its Trump-friendly governor, Ron DeSantis, took heat for allowing beaches to stay open despite the risk of spread to his state’s massive population of vulnerable senior citizens.

“They thought they were going to be running for reelection with a very popular governor, but DeSantis has taken some real hits over his handling of this,” said Republican strategist Alex Conant, who worked for Marco Rubio’s presidential campaign. “The image of spring breakers spreading coronavirus is going to be replayed in October.”
___
Riccardi reported from Denver and Beaumont reported from Des Moines, Iowa. Associated Press writers Zeke Miller and Jill Colvin in Washington, Josh Boak in Baltimore and Steve Peoples in Montclair, N.J. contributed to this report.