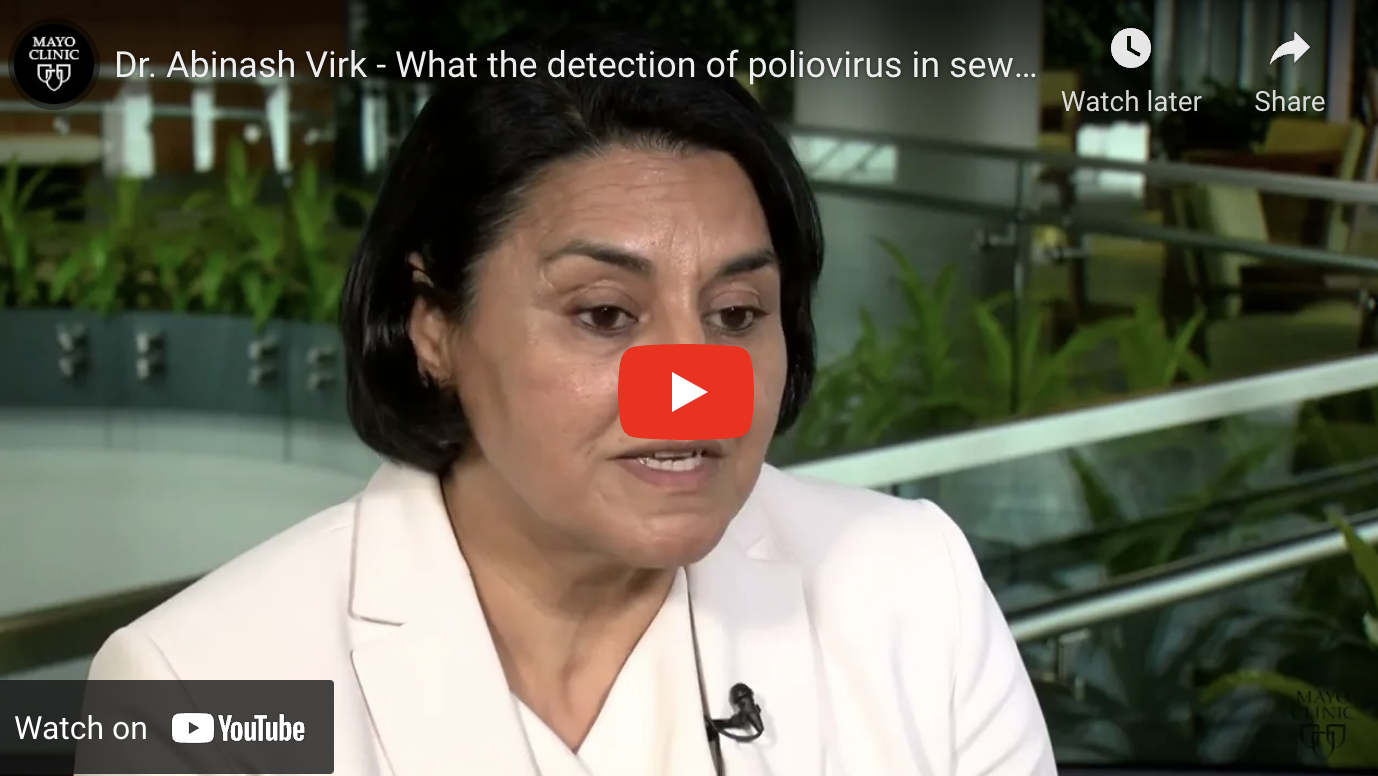 MAYO CLINIC NEWS NETWORK – Polio, also known as poliomyelitis, is caused by the poliovirus. The contagious virus can infect a person’s spinal cord and cause paralysis.

The virus has been detected in the sewers of London, and in sewer systems in New York, including New York City. Health officials are urging unvaccinated residents in those communities to get immunized or get boosters if already vaccinated.

“The single case that we have in the U.S. appears to be vaccine strain polio and seems to be related to the virus that has been identified in the sewage system in the U.K.,” says Dr. Abinash Virk, an infectious diseases specialist at Mayo Clinic.

“The important thing about this particular case is that he never traveled anywhere outside of the U.S. He got it from somebody here in the U.S.”

There are many questions that health officials are now trying to determine, says Dr. Virk, including how the virus got into the U.S., where it is now, and how many people are at risk.

“The Centers for Disease Control and Prevention (CDC) urges everyone who is not vaccinated against polio to do so, and for parents and caretakers to ensure their children are fully vaccinated.”

Polio is a viral illness spread through oral fecal contamination.

“What that really means is that when somebody gets polio, the virus goes into the GI (gastrointestinal) tract or the intestinal tract, and they shed it in the stool,” says Dr. Virk. “If someone else comes in contact with that person’s stool — whether it’s from hygiene issues, or food or water contamination — that person can pick up the virus and get polio.”

From there, the virus can enter the nervous system and lead to potential paralysis that can be permanent.

Those at risk are unvaccinated and partially vaccinated people or those who may have lost immunity due to a prolonged duration since their vaccination series.

“The Western Hemisphere, and in fact, much of the world has been certified to be polio free. Currently, only two countries in the world have what we call wild strain polio, meaning that this is the original, natural strain polio, and they are Afghanistan and Pakistan,” says Dr. Virk.

Dr. Virk says other countries have had cases of polio but are caused by what’s referred to as vaccine strain-derived polio, like the type detected in the New York patient.

In 1961, the first live attenuated oral poliovirus vaccine was licensed in the U.S. as an oral vaccine rather than an injection. It was easier to distribute than the inactivated polio vaccine licensed in 1955 and provided greater immunity than the inactivated vaccine. However, occasionally the mutations within the weakened virus were found to emerge, especially in underimmunized populations. This type of polio virus has developed mutations that can cause infection and paralysis.

“The oral polio became the vaccine to basically be spread around everywhere. Over time, some of these weakened viruses developed mutations. And these mutations allowed this virus to basically flip back into more like the old original wild strain virus —and can cause the same kind of disease that the wild strain of the virus can cause. And that’s really called the vaccine strain derived paralytic polio,” says Dr. Virk.

Since 2000, the U.S. has been providing effective inactivated polio injection, which cannot cause infection.

“All of the world that has certified to be polio-free is essentially using inactivated vaccine, and that is varied for each country when they have become basically certified as polio-free,” says Dr. Virk.

The Centers for Disease Control and Prevention (CDC) urges everyone who is not vaccinated against polio to do so, and for parents and caretakers to ensure their children are fully vaccinated.

“We really should be aiming for getting everyone protected.”

Polio vaccination in the U.S. is part of children’s recommended vaccination schedule that includes diphtheria, measles, mumps, rubella, tetanus, whooping cough (pertussis), and others. The schedule is on the CDC website. Contact your health care professional to ensure your child is current on immunizations.

The polio epidemic in the U.S. reached its peak in 1952, with more than 20,000 cases of reported paralytic poliomyelitis. The illness, believed to be first described in literature by Dr. Michael Underwood, a British physician, in 1789 was first observed as an epidemic in the U.S. in 1894.

Patients with paralytic polio were unable to breathe on their own. A tank respirator known as the iron lung was invented in 1931 and became an iconic reminder of the polio epidemic. Some patients stayed in the iron lung for weeks, while others remained in the respirator for life.

Learn about the history of polio vaccinations on Mayo Clinic’s “History of Polio: Outbreaks and Vaccine Timeline.”