Watch Funeral Procession For Boston Cop Who Died Of COVID-19 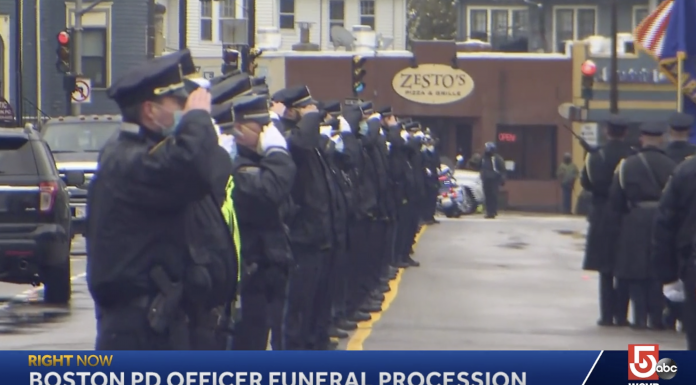 BOSTON GLOBE – A procession Thursday for Boston police Officer Jose V. Fontanez, a 29-year veteran of the force who died this week from COVID-19, carried the decorated officer, father, and grandfather from Boston Medical Center to a funeral home in Jamaica Plain, the neighborhood he patrolled for decades.

Under normal circumstances, police said in a statement, officers would have gathered in tight lines to salute Fontanez on Albany Street near the hospital, where he died Tuesday.

But due to social distancing requirements of the pandemic, officers paid their respects by spacing “accordingly with their blue lights activated” along the route to offer a salute, the statement said.

Fontanez’s body was escorted from the campus of Boston Medical Center around noon, passing by his district station and concluding at the Mann and Rodgers Funeral Home.

“Let me tell you, folks, this was a great man,” Boston Police Commissioner William Gross said at a news conference outside City Hall on Tuesday. “Loved this city. Loved his family. And loved his family in blue and served them well.” Gross thanked nurses and doctors at Boston Medical Center “for taking care of our brother.”

Fontanez, who was 53 when he died, received several commendations over the course of his service, Gross said …

“We lost a hero today to this virus,” Mayor Martin J. Walsh said Tuesday. “We honor him and remember him as a hero, because as a police officer he served our community and stood in harm’s way to protect us. He made the ultimate sacrifice.”

Governor Charlie Baker also expressed his condolences Tuesday and said the pandemic has highlighted the difficulties of working in law enforcement.

“They open doors every day where they have no idea what’s going to be on the other side,” Baker said. Read more.