Walmart Shopper Bodyslammed After Refusing To Wear A Mask 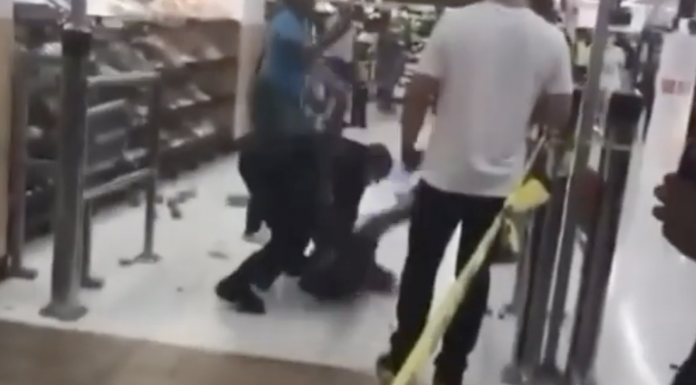 BIRMINGHAM, Ala. (AP) — A woman faces disorderly conduct charges after an altercation that began when a Walmart employee in Alabama asked her to wear a face mask in the store and ended with a police officer performing a “take-down” maneuver on her, officials said.

Video of the confrontation at a Birmingham Walmart circulated widely on social media. The video shows the officer picking the woman up and throwing her to the ground. It appears he was attempting to handcuff her.

The Birmingham Police Department addressed the incident in a video statement.

Sgt. Rod Mauldin said a Walmart employee had told the woman to wear a face mask in the store, and the officer became involved because the woman became disorderly.

Mauldin said the woman refused to leave the store and then resisted when the officer tried to detain her.

“The officer used a take-down measure to gain control due to the other threat factors in the store,” Mauldin said.

The department said she was charged with disorderly conduct, resisting arrest and criminal trespass. The department did not release her name.

The police department said it has not issued any citations or made any arrests as it relates to the city’s shelter-in-place ordinance or face covering ordinance.

A group of women who identified themselves as family members of the woman arrested said the woman was leaving the store when the officer used the measure.

(CNN) An unidentified woman who was body-slammed by an off-duty police officer in an Alabama Walmart faces multiple charges, police say, in an incident they said may have been sparked over her refusal to wear a mask.

In a Facebook post featuring three cellphone videos, which has about 150,000 views, a woman is seen arguing with the officer, who was working as a security guard inside a Walmart in Roebuck, Alabama, as he attempts to detain her.

After a brief struggle, the officer lifts the woman up and drops her to the ground.

According to a video statement posted to the Birmingham Police Department’s Facebook page, a preliminary investigation revealed that a Walmart associate requested the woman put on a mask before entering the store, but she grew disorderly …

Though employees at Walmart are required to wear face masks, customers are only encouraged to do so, according to the company’s website.

“Although most state and local governments do not mandate the use of face coverings in public settings, the CDC has reported that recent studies show a significant portion of individuals with the virus lack symptoms and can transmit the virus,” said Walmart CEO John Furner in the memo to US employees. “With this knowledge, we believe it is simply in everyone’s best interest to use masks or face coverings to curb the spread of this disease.”

CNN reached out to Walmart for comment about the incident, but the company deferred to the local police.

The City of Birmingham instituted a face covering ordinance effective May 1, requiring anyone “interacting with persons who are not part of your household” cover their nose and mouth. It’s punishable by a fine of $500 or 30 days in jail, but police said they simply hoped to educate people. Read more.