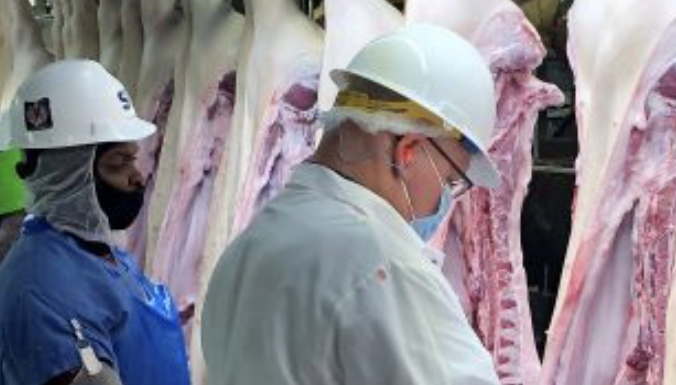 Publisher’s Platform: I still want to go out of business — it’s Salmonella this time | OPINION

FOOD SAFETY NEWS – Some, I am sure, are a bit tired of my ranting about the FSIS doing its job and deeming Salmonella that causes human illness an adulterant in meat.

Fact, after E. coli O157:H7 was deemed an adulterant in ground beef in 1994, it took about a decade for E. coli illness cases to drop.  During that time, we saw the same drop in clients seeking our help.  Go figure, the USDA’s Food Safety and Inspection Service (FSIS) and the beef industry heeded my call.  It is time to do the same with Salmonella.

Here is a link to a PowerPoint from a presentation I gave a few days ago – https://www.slideshare.net/marlerclark/2021-british-columbia-food-safety-speech

This summer, scores of Americans, most of them small children or senior citizens, have already or will become deathly ill after eating ground beef boldly labeled “USDA approved.”

Now we know that this recall came weeks late, after most of that meat had been consumed by innocent consumers from Washington State to New Jersey. Because they trusted government’s food inspections, several kids suffered kidney failure and spent days or weeks hooked up to kidney dialysis machines. For some, the long-term prognosis is grim, with the risk of further kidney failure, dialysis, transplants or worse. I know this because I am a trial lawyer who has built a practice on food pathogens. Many of those kids’ parents have hired me to help them get compensation for hundreds of thousands in medical costs. Which may prompt some readers to consider me a blood-sucking ambulance chaser who exploits other people’s personal tragedies.

If that’s the case, here’s my plea:

Put me out of business. Please.

For this trial lawyer, E. coli has been a successful practice – and a heart-breaking one. I’m tired of visiting with horribly sick kids who did not have to be sick in the first place. I’m outraged with a food industry that allows E. coli and other poisons to reach consumers, and a federal regulatory system that does nothing about it.

Actually inspect and sample food. At present, the U.S. Department of Agriculture employs thousands of inspectors across the nation to inspect hundreds of plants that produce millions of pounds of beef at processing plants and retail outlets. The General Accounting Office has warned that the USDA’s food samplings are so scattered and infrequent that there is little chance of detecting microscopic E. coli or any other pathogen.

So hire more inspectors and give them real authority to sample meat and stop its distribution as soon as a pathogen is detected. Implement a sampling system that provides a reasonable chance of preventing another outbreak.

Doing so might add a nickel a pound – maybe less – to the price of hamburger. But it will also cut into my business. And isn’t that the idea?

Consider mandatory recall authority. This authority was required in Sen. Tom Harkin’s Safer Meat, Poultry and Foods Act of 2002. Under the present system of voluntary recalls, no company has actually refused to recall contaminated product. But in its recent report, the GAO did document several instances where companies delayed complying with recall requests. Delays mean tainted product has more time to reach consumers.

Require the meat industry to document where specific lots of food are sold. That way, it can be recalled quickly if a pathogen is detected. In most E. coli outbreaks, there is no recall because retailers don’t know where the meat came from and processors rarely step forward. ConAgra deserves credit for owning up to its responsibility to track down as much of the tainted meat as possible and for covering the medical costs of its victims.

But ConAgra is the exception. Timely online records would allow meat to be efficiently tracked down and recalled as soon as inspectors get a positive test result. Those plastic club cards issued by grocery chains could enable stores to contact specific individuals who have bought suspect ground beef. Merge the two federal agencies responsible for food safety. Right now USDA’s Food Safety Inspection Service and the inspection arm of the Food and Drug Administration share this mission. The system is bifurcated, which leads to turf wars and split responsibilities. We need one independent agency that deals with food-borne pathogens.

None of this will stop E. coli entirely. This invisible poison has been around a long time and is bound to pop up again. But these steps will enable us to detect it far more quickly, to alert stores and families, and to keep our most vulnerable citizens – kids and seniors – out of harm’s way. And, with a little luck, it will force one more damn trial lawyer to find another line of work.

Here is me testifying before Congress in 2008.