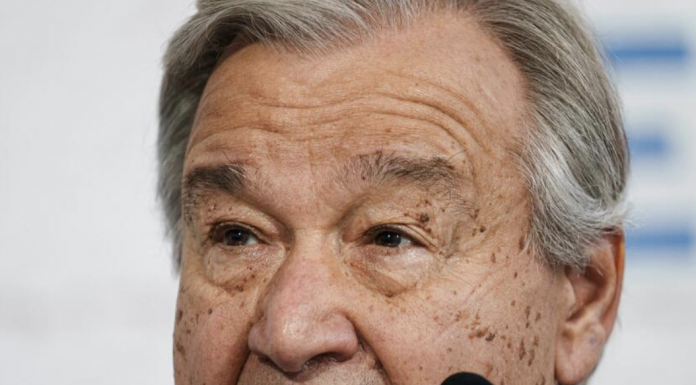 ROME (AP) — U.N. Secretary-General Antonio Guterres on Friday challenged the G-20 leaders to overcome “dangerous levels of mistrust” among themselves and between developed and developing nations to try to avoid “climate catastrophe” as well as narrow an “immoral gap” on global vaccine distribution and pandemic recovery aid.

Guterres spoke to reporters in Rome on the eve of the Group of 20 summit, whose members account for 80% of the world’s GDP.

He stepped up his recent cries of alarm that the Glasgow climate meeting, which begins Sunday in Scotland and will see participation by many G-20 leaders, including U.S. President Joe Biden, won’t make good on promises.

“Let’s be clear — there is a serious risk that Glasgow will not deliver,” he warned. He said current, formal commitments by governments “still condemn the world to a calamitous 2.7 (Celsius) degree increase” in global temperatures.

The U.N, chief expressed skepticism about recent pledges, saying “we are still careening toward climate catastrophe.”

“The recovery is amplifying inequalities. This is immoral.” – U.N. Secretary-General Antonio Guterres

“We see dangerous levels of mistrust among the big powers,” Guterres said, labeling that an obstacle to the “massive mobilization of political will” he deems vital to successfully deal with climate change.

He also cited worrisome mistrust “among members of the G-20. Between developed and developing countries – including emerging countries.”

Thus, for the U.N. leader, “the most important objective of this G-20 summit must be to re-establish trust — by tackling the main sources of mistrust — rooted in injustices, inequalities and geo-political divisions.”

He cited no country by name. But later, answering reporters’ questions, he acknowledged that emissions-reducing efforts by China and Russia, whose leaders won’t be attending the G-20 in person, were crucial to successfully tackling global warming and other climate problems.

“Global coordinated action has taken a backseat to vaccine hoarding and vaccine nationalism,” he said, scathing in his criticism of a situation where in the richest countries, people are getting a third dose of the vaccine, while only 5% of Africans have been fully vaccinated.

He also blasted how pandemic financial aid is being used to boost recovery. Guterres said while advanced economies are investing almost 28% of the GDP into recovery efforts, for middle-income countries, that percentage drops to 6.5. For the least development countries it is 2%.

“The recovery is amplifying inequalities. This is immoral,” Guterres said.

He urged the G-20 countries to do more on easing debt for developing countries. “Countries should not be forced to choose between servicing debt or serving their people,” Guterres said.

The U.N. chief called on the G-20 leaders to make good on commitments to provide $100 billion each year to developing countries for climate finance.