Trump Asserts Virus Will ‘Go Away’ Without Vaccine 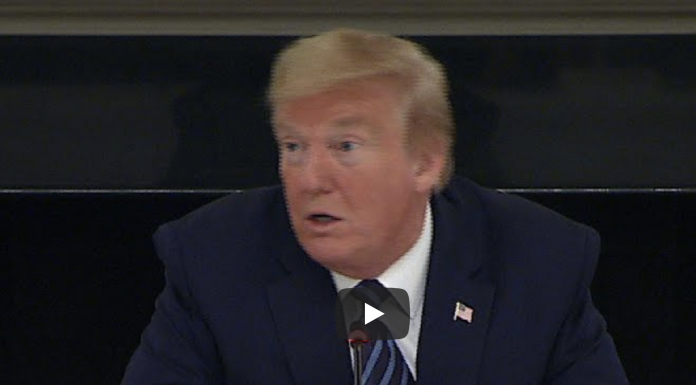 “This is going to go away without a vaccine, it’s gonna go away.” – President Trump

Yahoo News – President Trump on Friday broke with health experts, telling reporters that the coronavirus will “go away without a vaccine.”

“This is going to go away without a vaccine, it’s gonna go away, and we’re not going to see it again, hopefully, after a period of time,” Trump said at the White House. “You may have some flare-ups, and I guess I would expect that.”

Just days ago the Trump administration launched Operation Warp Speed, a project to accelerate the production of a vaccine for the coronavirus, which as of Friday had infected at least 1.2 million Americans and killed more than 76,000 here.

Dr. Anthony Fauci, the leading expert on infectious diseases on the coronavirus task force, has repeatedly cautioned that a vaccine is still at least a year to 18 months from being made available to the public.

In an interview last week with Fox News, Fauci said the coronavirus outbreak was “not going to be over to the point of our being able to not do any mitigation until we have a scientifically sound, safe and effective vaccine.”

Asked what led him to believe that the virus would disappear without a vaccine, Trump claimed he had received that information from medical professionals:

Philadelphia Inquirer – In 1846, the measles descended on a rocky cluster of islands in the North Atlantic for the first time in decades, and its path was relentless.

The virus infected more than 6,000 of the Faroe Islands’ 7,782 inhabitants, killing dozens of the old and the very young.

Yet one hardy group of elder islanders was entirely spared: 98 people who were infected the last time the virus had hit the islands, 65 years before.

The human immune system remembers measles like a bitter family feud, remaining quick to strike back for a lifetime after the initial insult.

On the other end of the spectrum is norovirus, that diarrhea-inducing bane of day-care centers and cruise ships. After recovering, people can be reinfected within a few months.

No one can say for sure yet what will happen with the coronavirus.

Those scattered reports of people becoming reinfected thus far have generally proven to be false alarms.

But if evidence from other types of coronaviruses is any guide, the amount of time that people remain immune will be on the shorter end of the scale.

And those immunity “passports” you’ve heard about? More on that concept below — but for a variety of reasons, putting it in practice won’t be as simple as it sounds.

The immune system’s response to the coronavirus will provide clues for another closely watched front: how it will react to a vaccine.

More than 100 efforts are underway to produce such drugs — designed to stimulate the type of protective response that would result from an infection without making the person sick — and the makers of several forecast they can distribute doses to high-risk populations by year’s end. Read more.