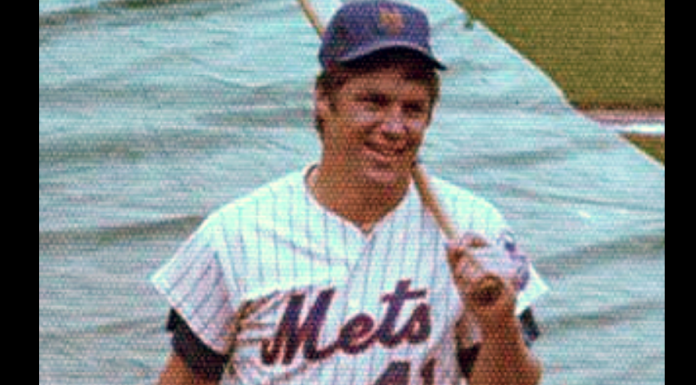 “Tom was a gentleman who represented the best of our National Pastime.”

NY Post –  Tom Seaver, who wears the crown as the undisputed greatest Mets player of all time, has died after battling various illnesses.

The Hall of Fame, which announced the former pitcher’s death, said the 75-year-old Seaver died Monday in his sleep of complications from Lewy body dementia and COVID-19. Seaver had retired from public life in March 2019, his family announced at the time, because of dementia.

Nicknamed “The Franchise,” the right-hander was the centerpiece of the 1969 Miracle Mets, who shocked the sports world with an improbable run that culminated with a World Series victory over the Orioles.

Seaver won three Cy Young Awards with the Mets before he was infamously traded to the Reds in June 1977 following a long dispute with team management.

He returned to the Mets in 1983, but was left unprotected after the season, putting him in a White Sox uniform when he won his 300th game two years later.

“I am deeply saddened by the death of Tom Seaver, one of the greatest pitchers of all-time,” commissioner Rob Manfred said in a statement. “Tom was a gentleman who represented the best of our National Pastime.

He was synonymous with the New York Mets and their unforgettable 1969 season. After their improbable World Series Championship, Tom became a household name to baseball fans — a responsibility he carried out with distinction throughout his life.”

Seaver, whose No. 41 is only one of two player uniforms retired by the Mets (Mike Piazza’s No. 31 is the other), returned to the organization in later years as a broadcaster and team ambassador.

The Mets and the City of New York last year changed the address of Citi Field to 41 Seaver Way … Read more.