Toby Keith Puts A Boot In Cancer’s A** 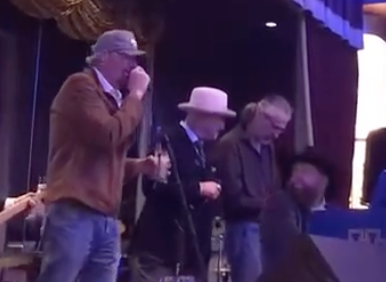 CINCINNATI.COM – After a year of battling cancer, country music star Toby Keith took the stage at a well-known area restaurant.

On Friday, Nov. 4, Keith surprised patrons with an impromptu performance at Jeff Ruby’s Steakhouse in Lexington.

Keith and Ruby performed a duet of the song “Sitting on the Dock of the Bay” by Otis Redding, which the musician said was a favorite of Ruby’s.

The Oklahoma native was in Lexington for the 2022 Breeders’ Cup, which took place on Friday and Saturday at Keeneland. Earlier in the day, Ruby shared a photo with Keith from Keeneland.

In June 2022, Keith announced that he had been diagnosed with stomach cancer at the end of 2021, having undergone chemotherapy, radiation and surgery for the past six months.

“I am looking forward to spending this time with my family. But I will see the fans sooner than later. I can’t wait,” he wrote on Instagram.

Since his diagnosis, Keith has remained in the public eye … READ MORE.

Toby Keith “Cancer Takes A Turn For The Worse; “It Is A Tough Week”