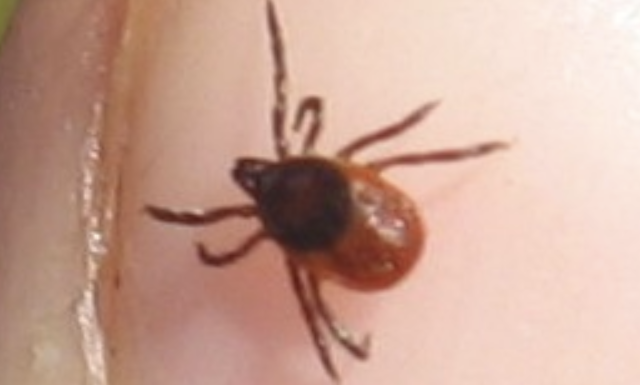 “The tick has evolved to go into places where humans can’t check very easily.”

NYUp.com – When you check your body for ticks after being outdoors, start with your thighs.

That’s the most likely spot to find ticks, according to a survey by Upstate Medical University’s tick-borne disease lab.

Of the 748 black-legged ticks sent over this spring and summer that had been attached to humans, nearly 16% of them were pulled off the thigh. Another 7% were pulled from the groin.

Saravanan Thangamani, professor of microbiology and immunology at Upstate and director of the SUNY Center for Environmental Health and Medicine, said:

“Ticks like to go and feed on the human body in places where it’s moist and warm. The tick has evolved to go into places where humans can’t check themselves very easily.”

Thangamani said that might be an example of natural selection:

Ticks that attached to humans in hard-to-spot places were more likely to survive and pass along that trait to their offspring.

Upstate’s Citizen Science Tick Testing Program, which started last year, added a question in March asking people who mailed in ticks to describe where on the body the tick was found.

That could be helpful in helping people avoid tick bites and the illnesses they cause, primarily Lyme disease, Thangamani said.

“Finding out where ticks latch onto a human body (lets) people check themselves in the proper locations when they come in from outside,” he said.

Ticks were pulled from other hard-to-see locations, including the scalp, armpits, belly button and back of the knee.

Fewer but still significant numbers were found on easier-to-see places, including the chest, waist, upper arm and wrist.

As the chart below shows, ticks in Central New York were pulled off just about everywhere on the body.

Black-legged, or deer, ticks can carry multiple diseases, including Lyme, anaplasmosis, miyamotoi and the rare but potentially fatal Powassan virus. Nymphs bite and remain attached to the body for three to five days … Read more.

The Guardian (UK) – Growing up in northeastern Ohio, Kimberly Byce spent much of her childhood running around in the woods, with the greatest threat being mosquito bites or sunburn.

She can’t remember her parents ever uttering the word “tick”. And yet, in adulthood, disease-laden ticks now blight her family’s life.

Byce’s husband Trent Beers has been struck down by Lyme disease twice in the past year, initially misdiagnosed after suffering back pain so bad he couldn’t emerge from bed, drenched from night sweats and his mind a fog of confusion.

Their sons Arbor, four, and Abbott, seven, were struck down by raging fevers initially thought to be related to coronavirus, but subsequently confirmed to also be from Lyme disease.

The family has been ravaged by the tiny black-legged, or deer, ticks, a creature the size of a pinhead that can carry Lyme disease and other maladies. Byce picked two of the ticks off her body last week, part of a regime that has become a constant worry in the family’s semi-rural household, located about 30 miles north-east of Columbus, Ohio’s capital. Byce said:

“It’s really wearing on the kids, when they are in the back yard I’m spraying them like a maniac which is kind of putting a lot of fear into them.

“I feel like some of their carefree childhood is being taken away but there’s the threat of a lot of damage. What’s scary is that I am the most diligent person with spraying, keeping to trails, being careful, checking for ticks. If I can get them on me, anyone can.”

That Byce could, in her lifetime, go from never even hearing about the warmth-loving ticks to fretting about them from as early as February each year is a possible symptom … Read more.