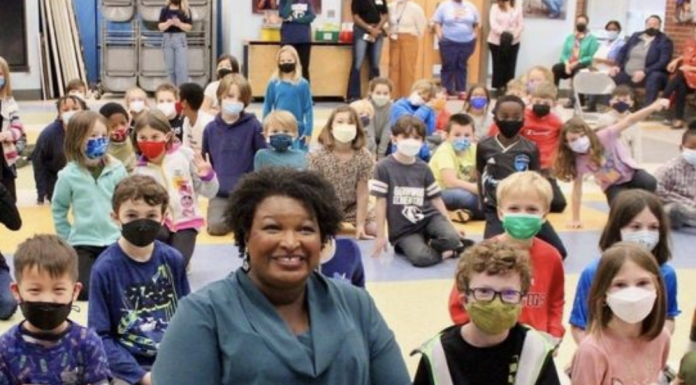 THE HILLL – Stacey Abrams is caught in a deepening storm after being photographed maskless amid a group of masked schoolchildren.

Abrams, a Democratic icon and voting rights activist who is making her second bid to become governor of Georgia, retweeted and then deleted a tweet that showed her visit to an elementary school in Decatur, Ga.

The deletion did nothing to quell the row, which has become a talking point beyond the limited confines of the political world.

The controversy reached ABC’s “The View” on Monday, with even liberal co-host Joy Behar declaring that Abrams had “kind of slipped up.”

On the same show, Ana Navarro, an anti-Trump Republican strategist, opined that it was a “stupid thing to do.”

The furor could have the most far-reaching electoral consequences, both in terms of Abrams’s own race and other contests across the country.

The photograph, with the smiling and maskless Abrams sitting cross-legged amid a group of elementary school students, seems virtually tailor-made for her opponents in Georgia.

Critics say that Republicans further afield will pounce on it as the perfect illustration of what they see as Democratic double standards and high-handedness.

“What opponents are trying to say is that there is a tremendous amount of hypocrisy from lawmakers who say, ‘Masks for thee but not for me.’ In this case, it is a very stark image that crystallizes all of her opponents’ criticisms of her,” Republican strategist Kevin Madden told this column.

The image is especially potent because it hits upon three of the most emotive topics within the broader discussion of COVID-19 restrictions:

masking, education and whether excessive restrictions are being placed upon very young children, for whom the statistical probability of becoming seriously ill with COVID-19 is very small.

Madden added, “It is one image that tells a thousand stories … ” READ MORE.