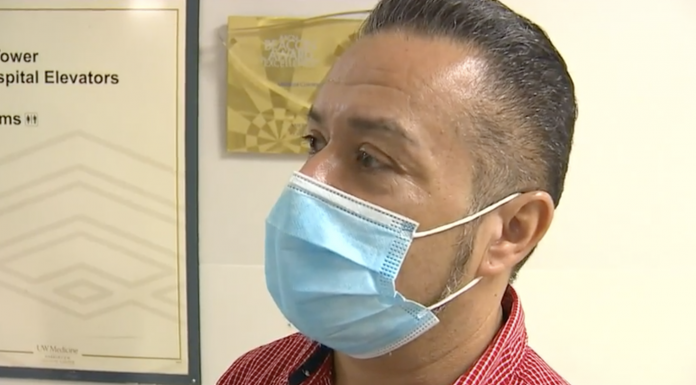 SEATTLE TIMES – Richard Soliz developed multiple blood clots on his lungs after catching the coronavirus this summer, and the staff at the Seattle hospital where he was being treated told him they were concerned one might move to his heart or brain.

The 54-year-old was on a heart-rate monitor, oxygen tank and eventually a ventilator. After being admitted to the hospital in late August, he spent 28 days at Harborview Medical Center, including two stints in the intensive care unit.

His life, Soliz told The Washington Post, was “literally hanging on a thread.” Once he was well enough to leave in September, Soliz said he couldn’t stop thinking about the staff.

“My goodness, they saved my life,” Soliz said. “In hindsight, I felt bad. And I knew in my heart, in my mind and my consciousness that it all could’ve been avoided.”

Soliz returned to Harborview Medical Center late last month with a message for his doctor and others who’d treated him during his stay: He was sorry.

“Soliz, who is now fully vaccinated, was left with scarring on his lungs from his time with COVID, which causes him to become winded easily. He also still has trouble sleeping.”

“I deeply regret not making the decision to get vaccinated,” he told one of his doctors.

Soliz, an artist, had opted against getting a coronavirus vaccine when they became widely available to anyone over age 16 earlier this year.

Soliz said he was confused by conflicting information.

He’d see one thing in the news, he said, only to have it negated by something he saw on social media or heard in the grocery store checkout line.

“You couldn’t go anywhere without somebody having something to say about it,” Soliz said.

Vaccine skepticism has been fueled by misinformation shared online, where social media companies have struggled to spot and remove anti-vaccine propaganda … READ MORE.

Richard Soliz: “I deeply regret not making the decision to get vaccinated.”