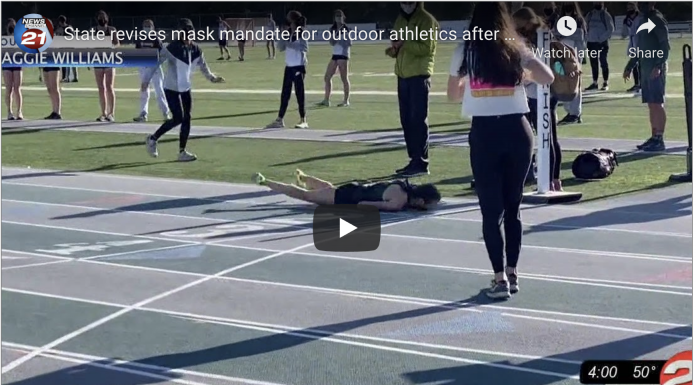 Her moment of glory has been somewhat overshadowed a by moment of concern – Williams passed out as she stumbled her way across the finish line. She and her coach say the mask is to blame, and now the Oregon Health Authority is updating its guidelines.

“I found out a couple minutes after my race, when I had recovered from my fall,” Williams told NewsChannel 21 Monday. “So super exciting for me.”

The fall Williams is referring to happened during the last seven meters of the race, just as she was about to finish.

Williams said her lack of oxygen is a result of the mask she’s been required to wear during competition, under OHA guidelines for outdoor sports.

“In the past, this has never happened,” Williams said. “Then this race that I was wearing a mask, it did happen, which I don’t think is a coincidence.” Her coach, Dave Turnbull, echoed that belief Monday morning.

“She just ran a 2:11 in Arizona without a mask on,” Turnbull said. Three seconds faster from my experience isn’t going to cause a kid to hit the track. When you’re in a mask, it certainly does.”

Turnbull said that after 31 years of experience, he’s confident this wasn’t a conditioning issue — it was a mask issue …  Click here to read more.