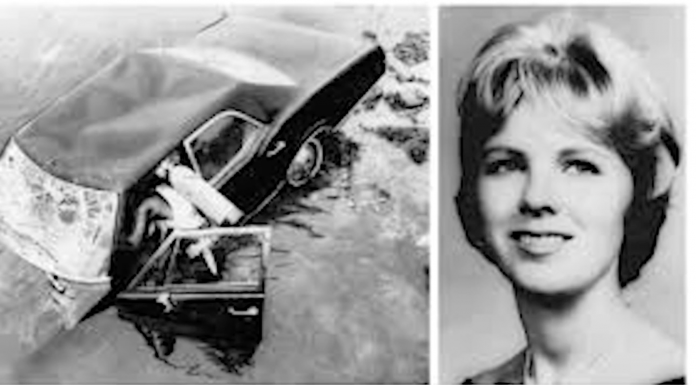 “Mary Jo Kopechne’s death, horrific as it was, spared the nation for what would have no doubt been a disastrous second Kennedy presidency.”

Of course, Mary Jo didn’t even make it to 29 – she died on July 18, 1969, when Sen. Ted Kennedy drunkenly drove his mother’s 1967 Oldsmobile Delmont off a small bridge into a tidal pond on Chappaquiddick on Martha’s Vineyard.

Teddy, drunk and with an expired driver’s license, swam to safety and didn’t bother to even report the death (by suffocation, not drowning) for 10 hours. By then he’d already made more than a dozen long-distance phone calls off the island, including one to another of his girlfriends in Palm Beach.

He’d also enjoyed a leisurely breakfast at the Shiretown Inn in Edgartown. Later, when Teddy finally sat down in the Edgartown police chief’s office, shakily filling out the incident report, he left a blank space next to the words “Mary Jo” – he didn’t even know her last name.

If it hadn’t been for Mary Jo Kopechne, Ted Kennedy might very well have become president, if not in 1972, then sometime later.

Mary Jo Kopechne’s death, horrific as it was, spared the nation for what would have no doubt been a disastrous second Kennedy presidency.

A Kennedy would know something about “insiders,” wouldn’t he?

Richard Nixon was president in 1969, and he feared that Teddy would be his opponent in 1972.

He had good reason to be apprehensive — the assassination of his two older brothers was still fresh in everyone’s minds, and the Kennedys had already stolen one presidential election from Nixon, in 1960.

But Teddy was the runt of the litter, as Nixon and everyone else in politics knew … Read more.