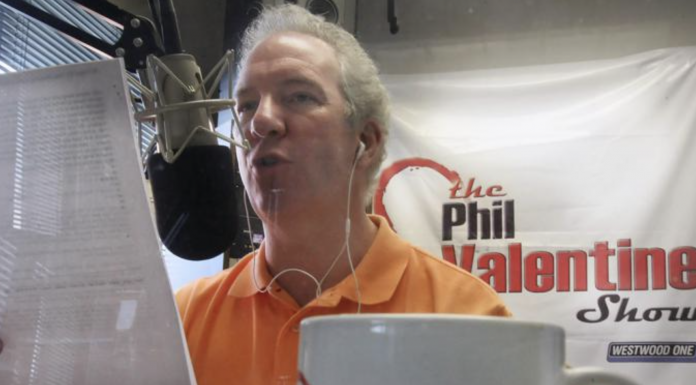 PLUS: 'Our hospitals are full of remorse': Texas doctor says many COVID patients regret skipping vaccine

NASHVILLE, Tenn. (AP) — A conservative talk radio host from Tennessee who had been a vaccine skeptic until he was hospitalized from COVID-19 has died. He was 61.

Valentine had been a skeptic of coronavirus vaccines. But after he tested positive for COVID-19, and prior to his hospitalization, he told his listeners to consider, “If I get this COVID thing, do I have a chance of dying from it?”

After Valentine was moved into a critical care unit, Mark Valentine said his brother regretted that “he wasn’t a more vocal advocate of the vaccination.”

“Phil Valentine was a visionary for the conservative movement.” – U.S. Sen. Marsha Blackburn

“He regrets not being more adamant about getting the vaccine. Look at the dadgum data,” Mark Valentine said.

Phil Valentine had been a radio personality since he was 20 and became a popular conservative host by railing against a state income tax proposed by Republican then-Gov. Don Sundquist, the Tennessean reported.

The program grew into a nationally syndicated show that aired for 12 years on as many as 100 stations, according to the newspaper.

SAN ANTONIO — Many patients in hospitals with severe COVID-19 who had not been vaccinated are not actually opposed to vaccines. Rather, they based their decision to forgo the vaccine on false information about its risks, or they had trouble getting it.

That’s among the observations that Dr. Barbara Taylor, an associate professor of infectious diseases and an assistant dean for the MD/MPH program at UT Health San Antonio, shared with the San Antonio Express-News Editorial Board on Thursday during a conversation about the pandemic.

The discussion, which included Dr. Peter J. Hotez of Baylor University and Texas Children’s Hospital in Houston, covered topics including the delta variant, booster shots, masks in schools and more.

While city officials said 87 percent of hospitalized COVID-19 patients are unvaccinated, Taylor said she’s talked with patients who incorrectly thought there would be long lines for the shots, had concerns about the vaccine or couldn’t find the time to get vaccinated because they have multiple jobs.

“Call every one of your friends and please ask them to get vaccinated.” – Unvaccinated Covid patient

“One of my patients (over the past two weeks) literally said, ‘I just didn’t get around to it,’” she said.

“What that means right now is that our hospitals are full of remorse. A lot of people are regretting prior choices, which is really heartbreaking.” … READ MORE (SUBSCRIPTION MAY BE REQUIRED)

LA CROSSE, Wis. (AP) — A high-ranking Roman Catholic cardinal who was hospitalized after contracting COVID-19 is off a ventilator and is being moved out of intensive care, according to officials at a Wisconsin shrine that he founded.

Cardinal Raymond Burke was to return to a regular hospital room Saturday at an undisclosed location, the Shrine of Our Lady of Guadalupe in La Crosse said in a statement.

Burke, 73, one of the Catholic Church’s most outspoken conservatives and a vaccine skeptic, had been sedated and on a ventilator following his tweet Aug. 10 that he had contracted the coronavirus.

“His sister spoke with him on the phone this morning, and His Eminence expressed his deep gratitude for the many prayers offered on his behalf,” the statement from the Rev. Paul N. Check, the executive director of the shrine said Saturday.

“His family asks that we continue those prayers for his full and speedy recovery, and they are grateful to God for the exceptional medical care the Cardinal has received from the dedicated doctors and nurses who continue to assist him,” the statement read.

An earlier statement from the shrine said Burke had received sacraments from priests and several relics had been placed in his room.

Burke holds a doctorate in canon law. He served as bishop in the Diocese of La Crosse before becoming archbishop in St. Louis. He left St. Louis in 2008 to oversee the Vatican’s supreme court, becoming the first American to hold that position.

He has built a reputation as an outspoken conservative. He drew attention in 2004 when he said he wouldn’t give Holy Communion to Democratic presidential nominee John Kerry because Kerry supports abortion rights. In 2009 he chastised the University of Notre Dame over plans to give then-President Barack Obama an honorary degree because Obama, too, supports abortion rights.

Francis moved Burke out of the Vatican court in 2014 after Burke said the church was like a ship with no rudder.

Burke has been on the attack against Francis since then. He joined three other conservative cardinals in formally asking the pope in 2016 to explain why he decided to let remarried Catholics receive Holy Communion.

Burke also has warned people that governments were using fear of the pandemic to manipulate people. He spoke out against mandatory vaccinations in May 2020, and said some in society want to implant microchips in people. He has said the best weapon for fighting the virus is Jesus Christ.