Pope Francis: Health Of All Is A ‘Common Good’ 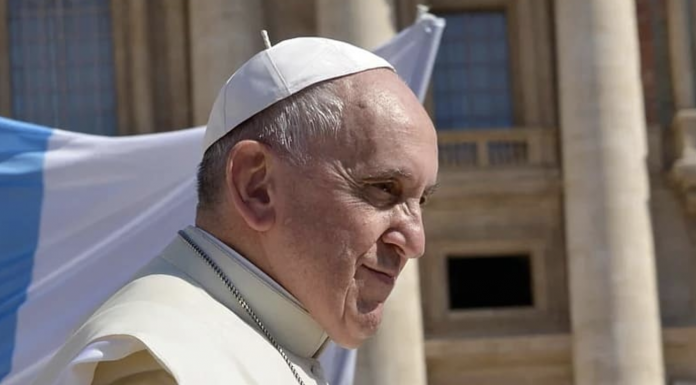 “A healthy society is one that takes care of everyone’s health.”

Pope Francis calls health of all a ‘common good’

The Associated Press, VATICAN CITY — Pope Francis arrived at his weekly general audience wearing a face mask and used hand sanitizer before appealing for the faithful to look out for the health of others as well as themselves during the coronavirus pandemic.

Francis took off the mask as his car pulled into the San Damaso courtyard inside the Apostolic Palace, where last week he resumed his weekly Wednesday public audiences after a nearly six-month COVID-19 shutdown.

While chairs were spaced out in the courtyard, the limited crowd massed along the barriers as Francis passed by and some lowered their masks to call out to him.

During his remarks, Francis lamented that “partisan interests” were emerging in which some nations and groups are seeking to keep vaccines for themselves, or to further their political or economic interests.

He said: “The coronavirus is showing us that each person’s true good is a common good and, vice versa, the common good is a true good for the person. Health, in addition to being an individual good, is also a public good. A healthy society is one that takes care of everyone’s health.”
___
HERE’S WHAT YOU NEED TO KNOW ABOUT THE VIRUS OUTBREAK

HONOLULU — Honolulu Mayor Kirk Caldwell says he will extend the city’s stay-at-home order for two weeks to control the coronavirus.

The stay-at-home order will be kept in place through Sept. 24. But the mayor says he will modify the rules to allow solo activity at beaches, parks and trails. Individuals will be able to run, sit or eat by themselves in these public places beginning Thursday.

Caldwell says he extended the order because the number of new COVID-19 cases hadn’t declined as much as he wanted.

He says he wants to discuss how to cautiously reopen more activities.

___
LONDON — British Health Secretary Matt Hancock says new limits on social gatherings in England to six people are set to stay in place for the “foreseeable future,” potentially until or even through Christmas.

Hancock said the new limit for both indoor and outdoor gatherings, which will come into force and be enforceable by law from Monday, will provide “more clarity” to people and should help keep a lid on a recent spike in coronavirus cases.

Scientists say a clear message is crucial in containing pandemic.

Though there are exemptions, such as for schools, workplaces and “life events” like funerals and weddings, the government is clearly hoping that the new limits will be easily understood and followed.

Unlike the previous set of guidlines, people could be fined for not following the rules — 100 pounds ($130) for a first offense, up to a potential 3,200 pounds.
___
PRAGUE — The Czech Republic has been facing a steep rise of new coronavirus cases with the number of people tested positive in one day surpassing 1,000 for the first time.

The day-to-day increase in the country reached a record of 1,164 on Tuesday, the Health Ministry said.

The previous record was less than 800 on Friday.

The spike has come a week after the start of the new school year with dozens of schools partially or completely closed due to pandemic.

Starting on Wednesday, it is mandatory again to wear face masks in stores and shopping malls. Bars, restaurants and night clubs have to be closed from midnight till 6 a.m.

The Czech Republic has reported 29,877 cases since the pandemic began, with 441 deaths.
___
NEW DELHI — India has added another 89,706 coronavirus cases to the second-highest reported tally in the world, and the government is saying schools will reopen later this month for senior students after more than five months closed.

According to the Health Ministry, India’s total caseload on Wednesday reached 4.37 million. The ministry also reported 1,115 deaths in the past 24 hours, taking total fatalities up to 73,890. India has the second-most reported cases in the world and the third-most reported deaths behind the United States and Brazil.

The Health Ministry on Tuesday announced partial reopening of schools from Sept. 21 for students of 9-12th grades for taking teachers’ guidance. Online learning will still be permitted.

India’s famed white marble Taj Mahal in the northern city of Agra will also reopen Sept. 21 with access restricted to 5,000 tourists daily to prevent overcrowding.
___
PEORIA, Ill. — Bradley University in central Illinois is requiring its entire student body to quarantine for two weeks because of clusters of COVID-19 on campus and is reverting to remote learning, officials announced Tuesday.

Officials of the private university said they have linked a spike of the coronavirus to off-campus gatherings. The Peoria university is requiring students to limit nonessential interactions, stay in their off-campus apartments, residence halls and take classes remotely beginning Tuesday.

The university said it has tallied about 50 COVID-19 cases so far, adding emergency measures are needed to respond to the outbreak without disrupting academic progress.

“Although it may seem extreme, this move to temporary remote learning and a two-week, all-student quarantine allows us to focus on the continuity of the educational experience for all of our students while giving us time to gather data on the full extent of the spread of the virus and assess the best way to proceed as a community,” Bradley President Stephen Standifird said in a message to students.

While about 4,600 undergraduates were enrolled at Bradley last year, it wasn’t immediately known how many are enrolled this fall.
___
SEOUL, South Korea __ The number of new coronavirus infections in South Korea has stayed below 200 for the 7th straight day, amid elevated social distancing rules.

The Korea Centers for Disease Control and Prevention said Wednesday the 156 cases added in the past 24 hours took the country’s tally to 21,588 with 344 deaths.

The agency says 100 of the new cases were locally transmitted patients in the densely populated Seoul metropolitan area, which has been at the center of a viral resurgence since early August.

Authorities in the Seoul area have recently ordered the shutdown of churches, night establishments and after-school academics while allowing restaurants to provide only takeouts and deliveries after 9 p.m.

South Korea on Monday reported 119 new cases in its lowest daily jump in more than three weeks. Its daily jump once surpassed 400 in late August.