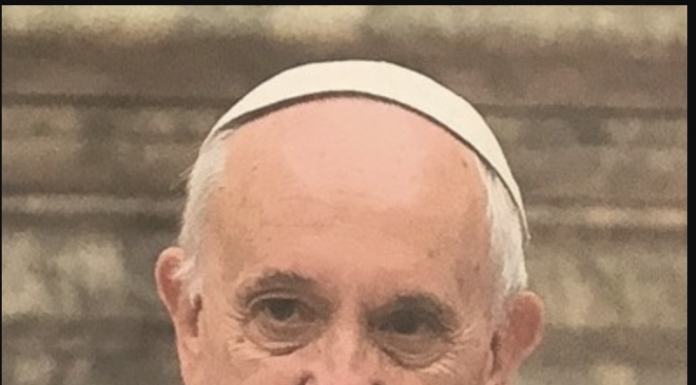 Francis is going ahead with his traditional Dec. 31 vespers service inside the basilica and will celebrate New Year’s Day Mass as scheduled.

The Vatican has largely followed Italy’s lead in imposing restrictions on crowds. Many Italian cities are opting for streamed concerts or theatrical productions where access by the public can be controlled to check for health passes.

In addition, the city of Naples banned the use of fireworks outright in a bid to keep crowds from forming in a city known for its explosive Dec. 31 festivities.
___

HERE’S WHAT ELSE IS HAPPENING TODAY:

HONG KONG — Hong Kong has confirmed the first cases of community transmission of the omicron variant of COVID-19, tied to an airline crew member who had returned from the United States and lunched at a restaurant two days later.

Two other people eating at the Moon Palace restaurant on Monday were infected. One was the father of the Cathay Pacific crew member and the other was a construction worker dining 10 meters (30 feet) away.

Health Secretary Sophia Chan said at a news conference Friday that city leader Carrie Lam had expressed her strong dissatisfaction to the airline’s chairman and its CEO that some staff had violated a 3-day self-isolation rule after their return. The health secretary called their actions “irresponsible.”

Cathay Pacific said in a statement that five crew members had tested positive for omicron recently, and some had not followed regulations. It apologized and said they would be disciplined.

Hong Kong has recorded 81 omicron cases. The others were among people who had arrived from overseas.

SYDNEY — New coronavirus infections soared again in Australia on Friday to a record of more than 32,000, just days after surpassing 10,000 for the first time.

Experts say the explosion is being driven by the highly contagious omicron variant and a recent relaxation of restrictions in Sydney and other areas.

More than 15,000 of the new cases were reported in Sydney. Another 5,000 cases came from elsewhere in New South Wales state, while almost 6,000 were confirmed in Victoria state, home to Australia’s second largest city, Melbourne.

While hospitalizations and deaths have been increasing from the surge, so far they haven’t reached comparative levels seen in previous outbreaks. And many cities are planning to go ahead with New Year’s Eve celebrations, including the famous fireworks display from the Sydney Harbor Bridge and Sydney Opera House.

JERUSALEM — Israel has begun delivering a fourth vaccine dose for people most vulnerable to coronavirus, becoming one of the first countries to do so as it prepares for a wave of infections driven by the omicron variant.

Israel, which led a world beating vaccination program in 2020, will administer a fourth dose of the vaccine to individuals with weakened immune systems along with elderly residents and employees in care homes.

The rollout of the fourth dose began at Israel’s Sheba Medical Center Friday morning and was administered to heart and lung transplant patients.

The country is currently experiencing a new wave of infections fueled by the transmissible omicron variant. There were 4,085 new cases recorded on Thursday, the highest daily count of infections Israel has seen since late September.

Israel, a country of 9.3 million people, has reported 8,243 deaths from the coronavirus since the start of the pandemic. Most of its population — more than 6.5 million people — has received at least one dose of the Pfizer/BioNTech vaccine, and more than 4.2 million Israelis have received two doses and a booster.

The government said Friday the current restrictions such as a four-person limit on private gatherings and a 9 p.m. curfew on restaurants and cafes will continue until Jan. 16.

Health Minister Kwon Deok-cheol says South Korea’s daily caseload has recently dropped to the 5,000s from the previous 8,000s thanks to the current distancing guidelines enforced two weeks ago.

But he says the number of critically or seriously ill patients remains above 1,000. Kwon says the omicron variant also continues to spread throughout South Korea and that it’s difficult to prevent it from becoming the dominant strain in South Korea.

NEW YORK — A coronavirus surge has upended plans to hold a major nuclear treaty conference at the United Nations next month, with participants agreeing Thursday to postpone the meeting days before its scheduled start.

After nearly two years of pandemic delays, delegations from around the world were due to converge Tuesday on U.N. headquarters to take stock of the 1970 Non-Proliferation Treaty, a pillar of nuclear arms control.

But organizers are now penciling in an Aug. 1 start date, according to an email Thursday from the U.N. disarmament office to entities involved. The conference was initially scheduled for spring 2020.

As coronavirus cases spike again in the U.N.’s host city of New York and a growing number of staffers are sick or or quarantined, the world body told the conference leader Monday that it couldn’t accommodate a big gathering now.

The NPT is the world’s most widely ratified nuclear arms control agreement, with 191 participating countries. Nations without atomic weapons committed not to acquire them and to allow verification that nuclear energy programs weren’t morphing into weaponry.

Countries that had nukes when the treaty was signed — the United States, Russia, Britain, France and China — agreed to move toward eliminating them.

Quebec Premier Francois Legault says the curfew will be in effect 10 p.m. to 5 a.m. as of Friday night and will run for an indefinite period.

Quebec imposed a pandemic-related nightly curfew last Jan. 9 and did not lift the measure until May 28. It has been the only Canadian province to order a curfew over the coronavirus.

In Ontario, classes had been scheduled to resume Monday but that has been pushed back to Wednesday. Officials say that will give schools time to provide N95 masks to staff and deploy more HEPA filter units.

HONOLULU — Hawaii set an all-time record for new coronavirus cases on Thursday as the state of about 1.5 million people reported nearly 3,500 new infections.

The daily total of new cases reported by health officials was 3,484, topping the record of 2,205 cases set the day after Christmas. The state was averaging just over 100 new cases a day at the beginning of the month.

The latest surge came about two weeks after the first omicron variant case was confirmed in Hawaii.

Honolulu Mayor Rick Blangiardi said there would be no new restrictions on Oahu over the New Year holiday. He said people should take personal responsibility to curb the disease.

SANTA FE, N.M. — New Mexico is running short of free at-home rapid tests to detect COVID-19 infections as the state struggles with the spread of the omicron variant of the coronavirus.

The company that runs the state’s program said Thursday that the state’s supply of tests was overstretched. The announcement came hours after Democratic Gov. Michelle Lujan Grisham wrote that residents could “order a testing kit today.”

By afternoon “all available tests have been shipped” and Vault Health was offering paid testing instead. The state reported an additional 2,209 cases of COVID-19 on Thursday and 26 additional deaths.

He said the U.S. Centers for Disease Control and Prevention said Wednesday’s figure was itself a state record, topping 7,548 set in August, during the delta variant surge.

Edwards says the number of people hospitalized with the virus has risen 268% since Dec. 17, to 762.

The governor said he would not mandate masks unless such an order is needed to keep hospitals from being overwhelmed. But he said people should heed masking recommendations from both the CDC and the state Department of Health.

He and other state and hospital officials around south and central Louisiana repeatedly urged everyone to take precautions such as getting vaccinations and booster shots.

The order is an extension of safety regulations that were already in place. Emergency Administrative Order 25 is the fourth emergency order issued by the chief justice since August which allows judges to postpone jury trials.

In his most recent order, Randolph cited the recent uptick in cases — especially the highly contagious omicron variant.

As of Dec. 14, there were 575 new COVID-19 confirmed infections in Mississippi. Approximately two weeks later, the number of confirmed cases increased more than eightfold, to 4,885 cases, Randolph said.

SACRAMENTO, Calif. — With a new and more infectious coronavirus variant sweeping California, attorneys representing inmates say violations of health orders by prison staff risk a repeat of the outbreaks that killed dozens in the first year of the pandemic.

The most recent statistics show large percentages of employees who are required to be tested twice weekly aren’t doing so, and most face no consequences.

Corrections officials say they are updating those figures but have not yet provided new data.

Officials are temporarily shutting down admissions to Wasco State Prison in the San Joaquin Valley where there have been more than 150 new infections in the past two weeks. Starting Monday, officials say inmates statewide must be fully vaccinated to have in-person or family visits, unless they have approved religious or medical exemptions.

The actions come as new cases soar across California and state models predict a gradual increase in hospitalizations and intensive care admissions over the next month.

SEATTLE — A Seattle-area medical system says it will soon limit COVID-19 testing appointments at its community testing sites because of an “astronomically high” positivity rate.

The Seattle Times reports UW Medicine said Thursday appointments will be limited to only those with symptoms or known exposures. Of UW Medicine’s 12 community testing sites, nine will soon start limiting appointments. Three will close temporarily.

The positivity rate is measuring more than 40% at some South King County testing sites and the high rate is slowing scientists’ ability to parse out which samples are actually positive.