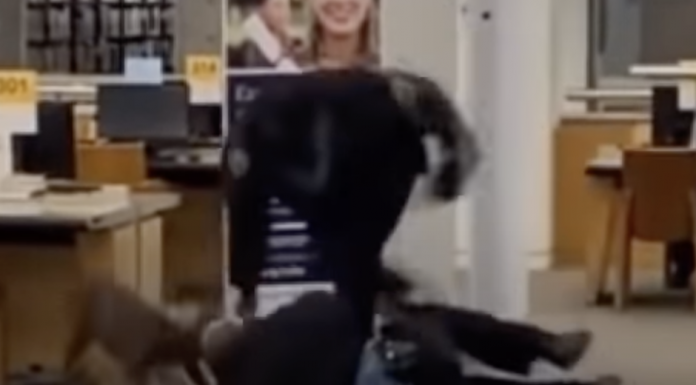 A library spokesperson tells KTVU the incident began when witnesses noticed the barking dog next to its unresponsive owner at a computer kiosk.

Two library security guards then approached the owner to administer Narcan, which prevents opioid overdoses, but the owner’s dog refused.

“The dog would not let them near him. The dog lunged at a guard taking hold of his arm and pushing him to the floor,” the public library said.

The horrific attack, captured on video by a witness, shows the security guard’s attempt to fend off the dog with a series of punches while his colleague tried to rescue him by spraying a substance in the direction of the dog’s face and hitting it with a belt.

A third security guard appeared in the video with the intention of helping as well.

The owner was reportedly unresponsive during the entire attack until he was awakened by another witness … read more.

Why Dog Attack Injuries Are Worse Than They Look

Animal Emergency Service – It’s a scary time for any owner when their beloved dog is involved in a dog attack, and you have every reason to be worried.

Unfortunately, dog attacks are a very regular occurrence through the hospital doors at Animal Emergency Service, and over the years we have seen a number of owners who are shocked by the damage done to their pets.

The reason for this shock is a term coined ‘the iceberg effect’ and it’s the reason our vets never underestimate the amount of damage caused underneath a dogs skin and fur when they’ve been attacked by another dog.

When a dog’s jaw engages with the skin in the instance of a dog attack, multiple things happen at once:

1. Bacteria-laden jaws are clamped down, puncturing the skin and injecting this bacteria into the body. There are approximately 330 varieties of bacteria that could be transferred at this stage of the dog bite.

2. A dog bite itself averages between 230-320 PSI (in comparison, a human bite averages 120-140 PSI), and the combination of the ripping and tearing action and this pressure causes significant damage both for the skin and the underlying tissues.

3. Stress reactors are released resulting in changes to the blood vessels and cardiac output – potentially sending the dog into shock.

The tissue damage from the sawing and shaking actions of a dog’s jaws while they are embedded result in a large amount of tissue damage underneath and is where the term ‘the iceberg effect’ comes from.

On the surface, the puncture wounds are easy to see, alongside external bleeding. This is often mixed in with fur and excess skin and may not appear to be more than scratches/bite marks.

It is what is underneath the visual wound that causes the most worry. As the skin is ripped upward, forward, and back, the subcutaneous layer is separated from the muscle, and the muscles themselves can be torn.

This causes dead space, which is an ideal hiding zone for bacteria and produces what we know as infected wounds … READ MORE.