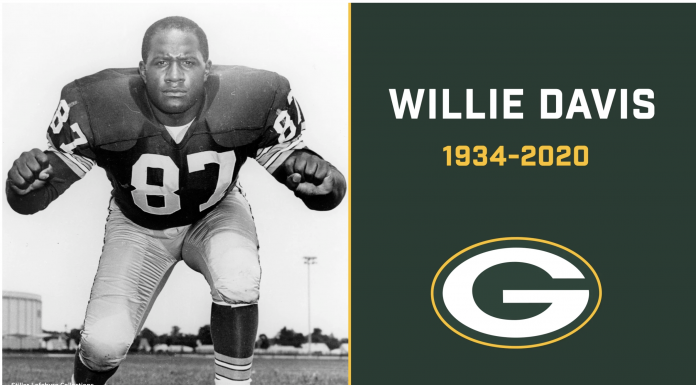 Davis was a 15th-round pick in 1956 by the Cleveland Browns, though he didn’t enter the league until 1958 following his service in the U.S. Army.

A guard and linebacker at Grambling, Davis was tried on both sides of the ball by the Browns until he was acquired in a masterful trade by Vince Lombardi.

Davis wasn’t happy – he had an opportunity to start on the offensive line in Cleveland – and considered quitting. Lombardi, however, saw what the Browns didn’t – his potential on defense.

“I consider speed, agility and size to be the three most important attributes in a successful lineman,” Lombardi told Davis. “Give me a man who has any two of those dimensions and he’ll do OK. But give him all three and he’ll be great. We think you have all three.”

Davis was, indeed, great. He was a five-time All-Pro and Pro Bowler and a member of the NFL’s all-1960s team in helping the Packers win five championships and the first two Super Bowls.

In 1981, he was inducted into the Pro Football Hall of Fame.

“Willie’s extraordinary athleticism was an undeniable factor in Green Bay’s winning tradition of the 1960s under Coach Lombardi. He helped the Packers through an unprecedented championship run and to two Super Bowl victories. Willie was a man of true character on and off the field. The Hall of Fame will forever keep his legacy alive to serve as inspiration to future generations.”

Davis played in all 162 career games. He played before sacks were an official stat but ranks as perhaps the greatest pass rusher in franchise history.

PACKERS.COM – A eulogy of Davis’ pro football life alone would include the following:

ALSO ON HEADLINE HEALTH TODAY: ‘Black People Are Not Allowed’ | Fauci Has Job Offer If Trump Fires Him | Trump Cuts Off WHO Funding