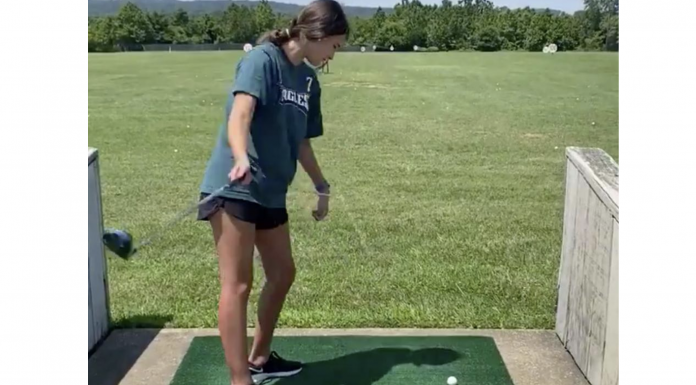 Teen gets attention of golf legends with one-armed swing |

She has two arms, but only needs one to make a great tee shot |

Golf Digest – Nick Faldo was perusing Twitter while relaxing on the beach in Florida earlier this week when he noticed that someone tagged him in a video that showed a teenage girl hitting a golf ball one-handed as her left arm rested by her side.

The thought was that perhaps the six-time major champion could offer a few pointers that could help the teen. So Faldo scrambled back to his house and got to work recording a few tips.

Growing up in suburban Philadelphia, sports were always a big part of Kendall Kemm’s life.

The Eagles and Phillies dominated her attention, and for two decades her mom, Leslie Gudel, worked for Comcast SportsNet, first hosting two nightly studio shows and then serving as the network’s Phillies reporter from 2010 through 2016.

When Kendall wasn’t watching games, she was playing them—softball, field hockey and basketball—along with her brother Chase, who is two years her junior and also plays baseball and basketball.

In 2014, Gudel introduced them to golf because she had fallen in love with the game growing up in California, where her own parents turned her on to it. Working in the sports biz and having played in countless celebrity outings, she also realized the value that being able to play golf possesses.

One summer day six years ago Gudel brought her two kids to the local Golf Galaxy for lessons.

Both took to it immediately, but Kendall showed a particular ability with a swing that would quickly prove fluid, effortless and natural.

“It doesn’t take a rocket scientist to figure out who has talent and who doesn’t,” said Leigh Taylor, a PGA professional for the last 15-plus years who gave Gudel’s kids their first series of lessons. “Kendall showed exceptional skills right away. She appreciated having fun but also learning and executing a difficult game. She kept coming back.”

Until one day she didn’t.

ALSO ON HEADLINE HEALTH TODAY: CNN Cancels The Word ‘Women’…It’s No Longer Politically Correct | State Has No Place To Put Bodies | Who Gets Priority For New COVID-19 Vaccine?