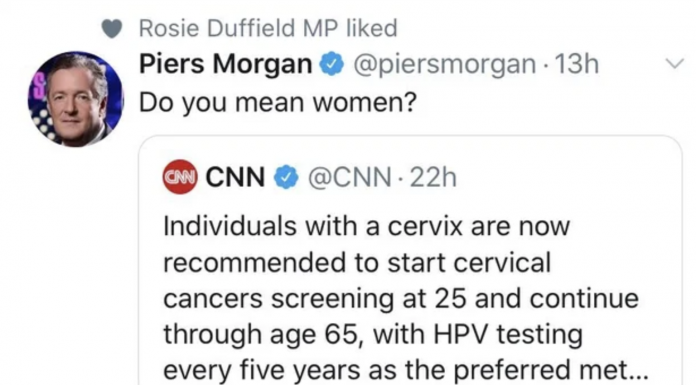 CNN tweets about “individuals with a cervix”

New Statesman (UK) – There is a new iteration of the bitter public debate over trans rights, and it all began with a single tweet by CNN.

The cable news company tweeted on Thursday evening (30 July) that new guidance by the American Cancer Society recommends that “individuals with a cervix” should begin cervical screening from the age of 25, rather than 21.

On Friday morning, it began to be picked up by prominent British commentators, including Piers Morgan and Iain Dale.

“Do you mean women?”, Morgan tweeted to his seven and a half million followers.

The argument that CNN should have said “women” instead of “individuals with a cervix” ricocheted around the internet, and engendered a new controversy, as the Labour MP Rosie Duffield “liked” Morgan’s tweet in implicit agreement, and then doubled down on it when accused by other Labour supporters of being transphobic, replying: “I’m a ‘transphobe’ for knowing that only women have a cervix….?!”

Her name spent most of the weekend trending on Twitter, and huge numbers of Labour activists are organising to report her for breaking party rules, while many others flock to praise her.

If you are sick of Twitter rows and “identity politics”, don’t give up on reading this article quite yet. The row isn’t just about language, but about public policy.

Duffield, who is chair of the Women’s Parliamentary Labour Party (PLP), the largest grouping of women in parliament, and who rose to prominence after delivering a powerful speech about her experience of domestic abuse in a parliamentary debate on the Domestic Abuse Bill, was challenged over this because trans men (for those who may be new to this, a trans man is someone born biologically female but identifies and lives as a man) do, also, have cervixes in many cases, and have a legal right (see the Gender Recognition Act of 2004) to be recognised as men … Read more.

Vagina Tester From Walmart – Should You Buy One?

Baptist Preacher Promptly Fired After ‘Coming Out As Transgender‘

ALSO ON HEADLINE HEALTH TODAY: State Has No Place To Put Bodies | 1-Armed Golfer Amazes [VIDEO] | Who Gets Priority For New COVID-19 Vaccine?