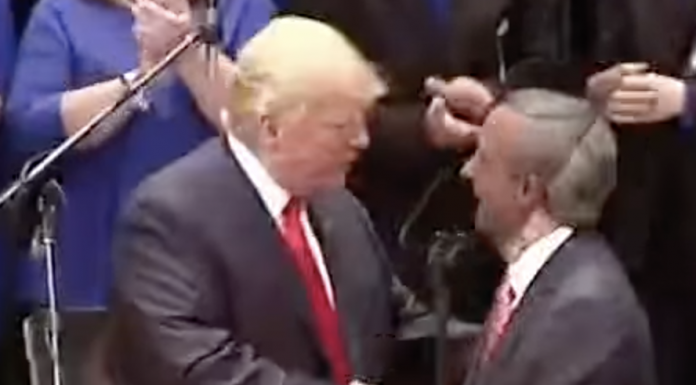 PLUS: “If you don’t have religion, get it now”

But a Trump-loving preacher at a Texas megachurch has decreed that there is “no credible religious argument” for turning down a shot, the Associated Press said.

The Rev. Robert Jeffress, a pastor at the 12,000-member First Baptist Church in Dallas, told the news agency that he and his staff are neither “offering” exemption letters nor “encouraging” members of their congregation to seek out religious exemptions from coronavirus vaccine mandates.

“Christians who are troubled by the use of a fetal cell line for the testing of the vaccines would also have to abstain from the use of Tylenol, Pepto Bismol, Ibuprofen, and other products that used the same cell line if they are sincere in their objection,” said Jeffress in an email.

Jeffress, who once suggested that he would vote for former President Donald Trump over somebody who embodies the teachings of Jesus, is one of many religious leaders who have recently opposed the use of religious exemption letters … READ MORE.

“Religious objections to vaccines, once used sparingly around the country to be exempted from various required immunizations, are becoming a more widely used loophole against the COVID-19 shot.”

‘If you don’t have religion, get it now’: Religious exemptions may circumvent vaccine requirements

ST. LOUIS POST-DISPATCH — As the St. Louis County Council prepared Tuesday to pass an ordinance requiring all employees to get vaccinated against COVID-19, resident Zina Hackworth stood up and offered hesitant workers a solution.

“If you don’t have religion, get it now,” she advised.

Religious objections to vaccines, once used sparingly around the country to be exempted from various required immunizations, are becoming a more widely used loophole against the COVID-19 shot.

And its use is likely to grow with President Joe Biden’s sweeping new vaccine strategy aimed at more than 100 million Americans, including executive branch employees and workers at businesses with more than 100 people on the payroll.

In the St. Louis region, an increasing number of municipalities, schools, hospitals and businesses are requiring workers to get the shot. But many also allow employees to abstain for religious reasons and get tested regularly instead.

Maryland Heights and Webster Groves require city employees to fill out forms attesting to their need for religious exemptions. They caution applicants that they may need supporting documentation to back it up.

BJC HealthCare workers had a Sept. 15 deadline to be vaccinated or to seek an accommodation. The hospital’s Chief People Officer Jackie Tischler noted the same policy has been in effect for other required immunizations, such as the flu vaccine, for over a decade … READ MORE.